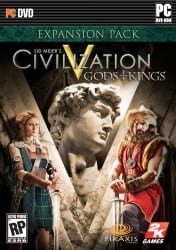 The expansion pack to Sid Meier’s Civilization V, subtitled Gods & Kings, will be released in North American on June 19, 2012, and internationally on June 22. The expansion adds religion and espionage features to the game, as well as nine new playable civilizations which will include: Byzantium, Carthage, Celtica, Huns, Maya, and the Netherlands.

Spanning the breadth of human civilization, the Gods & Kings expansion pack allows players to found the first Pantheon of the Gods and spread religion across the world as well as deploy spies in enemy cities to form allies and steal technology.