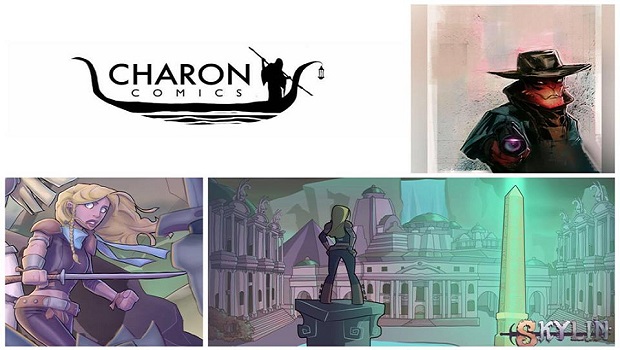 Indie publisher Charon Comics announced plans to bring two upcoming series to the comic market later this year. The two projects, Skylin and Sol Survivor, will debut this spring and summer respectively. Inspired by the Greek mythological figure of the same name, Charon Comics hopes to lead the way for the next generation of comic entertainment.

Company founders Fred Packard and Josh Valliere will work on both series, with Adam Cozart and Daniel Lopez working on Skylin and Sol Survivor respectively. Skylin chronicles a fantasy setting where the six nations of the land fell to the Demon King and his Serpen. However, after pleading to the Spirits from an ancient floating city for help, one warrior from each nation teamed up to defeat the Demon King. This began a cycle of a new generation of Serpens and riders fighting against the forces of evil every fifty years. The fantasy comic focuses on Princess Carly, a noble from the Ice Kingdom who becomes her nation’s Serpen Rider. The series is expected to run 12 issues, with a novelization and four deluxe volume releases following completion.

Making its debut after Skylin is sci-fi comic Sol Survivor. Set in a semi-dystopian future, Sol combines the wonder of Space Opera with the gritty drama of Sci-Fi. The series follows the eponymous Sol, the last Human, in his quest for survival as well as revenge for those that extinguished his people. The first arc is expected to run 10 issues, and an art book release, which shows concept art, is in the works as well.

Skylin’s first issue will be released this April. Preorders for the digital version are available now. Sol Survivor is slated to be released this summer. Stay tuned for more comic news on Gaming Trend.