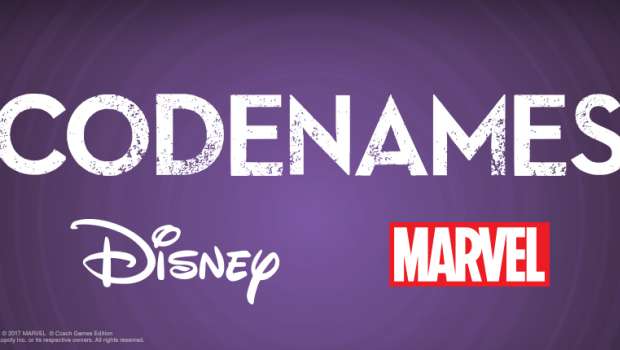 Codenames has become a huge hit, as it’s accessible to both gamers and non-gamers.  It’s a great way to stretch your vocabulary while making connections with different words (or pictures).  Now USAopoly has partnered with CGE to make new licensed versions of Codenames, including Disney and Marvel.

USAopoly Inc., announced today that themed versions of the highly acclaimed tabletop game Codenames inspired by Disney, Disney•Pixar and Marvel will be released this fall.

In 2016, Codenames was the winner of the board game industry’s most prestigious award— the Spiel des Jahres— in addition to numerous other accolades.

Codenames  Disney  Family  Edition  will  feature  characters  and  locations  from  Disney  and Disney•Pixar  films throughout the last  90 years.  Codenames Marvel Edition will appeal to Marvel fans and will be more of a traditional party game. The game will incorporate many fan favorites, including Marvel’s Guardians of the Galaxy, Marvel’s Avengers,Doctor Strange, and Spider‑Man.

“We’re particularly enthusiastic about the artwork, as it includes a great mix of characters and locations that Disney, Disney•Pixar and Marvel fans will appreciate,” Davis went on to say.

Codenames Disney Family Edition and Codenames Marvel Edition will be available in Fall 2017 and will retail for $24.95. Both games are targeted for players ages 8 and up and will be sold exclusively in North  America.

USAopoly, Inc. will be at Toy Fair in New York City, February 18‑21. For more information and details on some of the industry’s best games, visit USAopoly.com.

There’s an expansive well of licenses that could be made with Codenames, and maybe we’ll see some Pictures versions as well.  Since Codenames isn’t very expensive, I can see several versions on my own personal shelves.    Look for these two this fall.