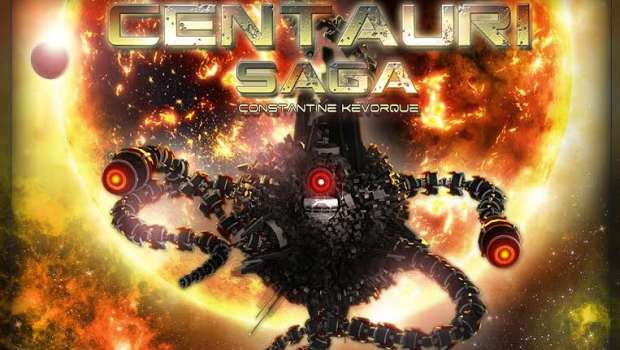 Centauri Saga is a cooperative game that I saw at last year’s Gen Con.  I have to admit, it looks pretty slick, especially coming from small publisher Vesuvius Media.  Now they are coming out with an expansion that gives it the legacy treatment, Season 1.

“We promised our players that Centauri Saga was just the beginning,” said Konstantinos Manos, Vesuvius Media’s CEO and Lead Game Designer. “It has been just over a year since the success of our first Kickstarter campaign, we gathered tons of feedback, really listened to our community of players, and now we’re excited to be back with a Legacy Expansion!”

Centauri Saga is a cooperative, sci-fi, 4X board game for 1 to 4 players. Centauri Saga Season 1: Legacy Game will be an expansion to the core game, not a stand-alone game that players need to buy from scratch.

“We’re gamers ourselves and we love Legacy games,” said Manos. “The thing we don’t like about Legacy games is the high price. That’s why we designed a Legacy expansion for Centauri Saga instead of the standard one-time use Legacy board game.”

With each new Centauri Saga Season, players will expand the components of the core game with new miniatures, cards, and game scenarios, but they can also play a Legacy Campaign. The Legacy Campaign will include opening secret packages, working through an exciting adventure, and playing several sessions where the choices made in one session affect the following sessions.

“We’re really proud of what we came up with and can’t wait to show it to the community!” said Manos.

Centauri Saga Season 1: Legacy Game will follow the same unique combination of characteristics of the core game – 4X, cooperative and playable with 1 to 4 players. The core game includes 47 highly-detailed plastic miniatures with the potential to unlock more during the new Kickstarter campaign.

“We 3D printed the Ravager Boss and it is awesome,” said Manos. “If we manage to unlock the Ravager miniature during this Kickstarter, the molds will make four pieces that create one very impressive Boss!”

The Kickstarter campaign will also offer upgrades to the core game such as thicker player mats, a more comprehensive rulebook and more.

If you like to support independent publishers, be sure to look for this one on Kickstarter.  I wouldn’t be surprised if you can get the original game with a Kickstarter pledge.