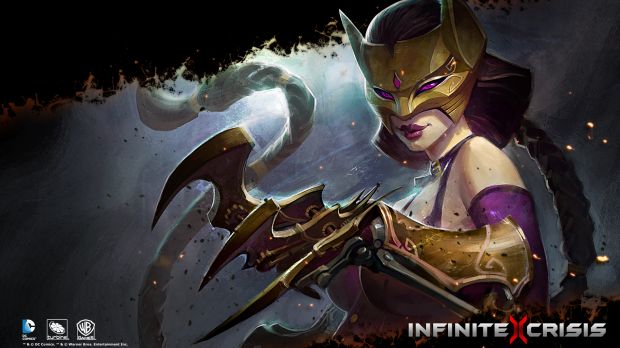 “Be wary of the bad kitty…” says the announcement press release of Catwoman’s profile video for Infinite Crisis. I think it’s no coincidence that  I had a dream last night that revolved around being attacked by an over sized cat who was hiding under my couch. The cat had nails the size of hockey sticks and looked similar to the Big Show. If only this announcement had been sooner… Enough about my disturbing personal life, Catwoman has arrived in Infinite Crisis! The new champion will available in this expanding MOBA on September 30th and we have a new video highlighting the famous feline (which sent shivers down my spine as I typed it).

As Gotham City master criminal turned mischievous vigilante, Catwoman’s attitude starts fights as quickly as her martial prowess ends them.  After her mother’s suicide, Selina Kyle’s father drank himself to an early grave. Selina was moved to an abusive state home from which she quickly escaped, taking to the streets. Petty thievery quickly became talented burglary, until she encountered Batman. The two soon discovered a mutual attraction, but due to… complications, neither party has ever fully committed to a romantic relationship.

You can sign up for the closed Infinite Crisis beta here! Look out for cats.