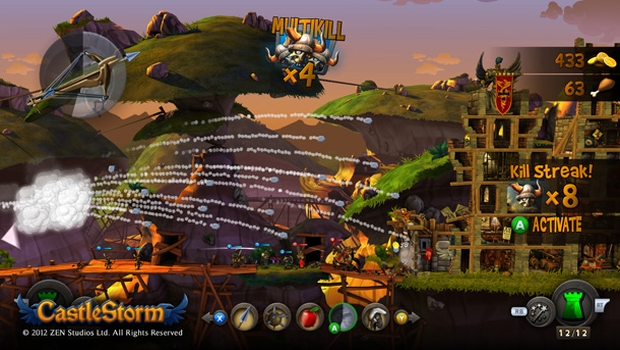 The folks at Zen Studios aren’t just pinball wizards – they’ve got a new game coming up.   This new title is called CastleStorm and is a physics-based tower defense / brawler heading to XBLA on May 29th.   To celebrate the upcoming launch we’ve got a new trailer to give you a look at the game in action.   Before we get to that, here’s a bit about CastleStorm:

It’s Knights vs. Vikings in CastleStorm, where medieval warfare meets 2D physics-based destruction! Controlling the battle in real time, players will harness the power of medieval artillery, manage a fearsome ground attack, and cast powerful spells! CastleStorm features a story-driven solo campaign, a custom castle editor, online multiplayer, co-op modes, and more. Building castles and knocking them down has never been so much fun!

The castle building (and this’ll show my age) reminds me of SimTower, and that’s not a bad thing.   The game also has a split-screen mode as well as cooperative play in two flavors.   Check out the trailer for some of the details from the developers themselves.  You can get a bit more on the official site while you spin up the dev diary below: