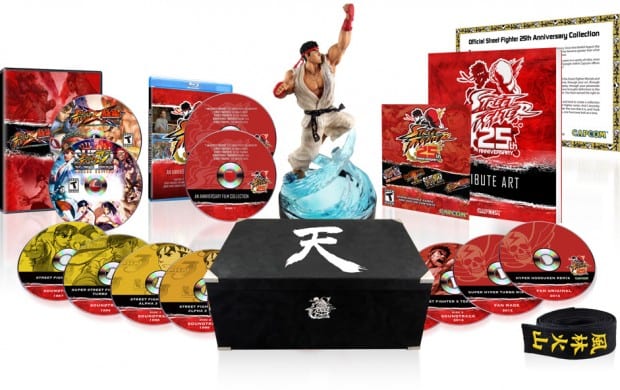 The Street Fighter series, one of the most popular and longest running games around, turns 25 this y ear, and in order to celebrate the anniversary of the legendary series, Capcom announced the release of a huge bundle of games, artwork and other goodies. The full list of content:

All in all, it looks like a bunch of really great content. The Street Fighter games all speak for themselves, though the absence of the original Street Fighter should be noticed. The soundtrack is bound to take you back to the days of slamming quarters into a SFII machine in the mall. I haven’t seen any of the movies, or the animated television show, but they fill out the package, and I’m sure they have their fans.

The pack is available on both PS3 and Xbox 360, and is available now. The price comes in a bit steep at nearly $150, but it looks like you’re getting a whole lot of content here Considering it’s just in time for the holiday season, this might make a good gift for the Street Fighter fanatic in your life.