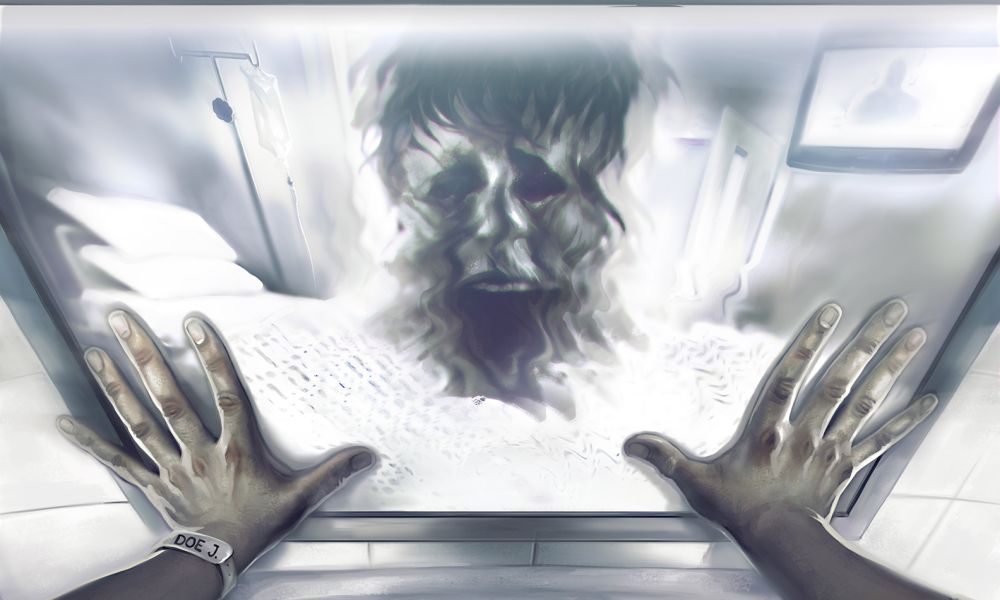 Some of the best board game experiences available have a horror bent.  The art and theme of Arkham Horror and its siblings always keep you guessing what will happen next.  The mystery of the unknown adds to the dread of the situation at hand.  The creepiest place in existence may not be the graveyard or the haunted house.  The hospital may hold that distinction, especially if you are a bit mentally unstable.  Everything Epic puts you in that setting with their current Kickstarter, Coma Ward.

Everything Epic, a leading publisher of story-driven board games today announced the launch of a brand new hospital themed horror board game: Coma Ward, the terrifying creation of Florida based game designer Danny Lott. The game has been developed and is now ready for crowdfunding. Additional details and art assets will be continually revealed throughout the campaign set to run through November 2, 2017.

In Coma Ward, you are a patient abruptly awakened in an abandoned, yet still functioning hospital with no memory or idea of what is happening. You must search the hospital for clues and necessities. In your search, you may find unspeakably terrifying things.

Each time you play, you explore an ever-changing St. Dymphna Memorial General Hospital as you search for the clues to your identity and the cause of the environment’s unsettling emptiness. Balance your ever worsening terror and neurosis while monitoring your health and physical attributes. Dangers lurking in the empty hospital can destroy your already fragile psyche. Once clues are uncovered, the real horror begins. You may discover what is happening and find out who you can trust — if anyone — and how to win.

“Coma Ward is an homage to the visceral and psychological horror of Clive Barker and David Cronenberg,” said Danny Lott, Designer of Coma Ward. “Horror is a mystery with a terrible solution. Horror, for me, is derived from two key elements: disempowerment and a lack of information,” said Lott about the game’s design. “Those ingredients run contrary to the archetypal foundations of board game design. The upcoming game extends the boundaries of tabletop board games, entering a new realm of psychological horror.”

“Carefully crafted RPG-like Choose-Your-Own-Adventure narratives precariously balanced with individual disempowerment caused by a lack of circumstantial knowledge fuels the game,” said Chris Batarlis, Everything Epic President and a lead developer on Coma Ward. “The Player is forced to embrace the futility of agency, yet still cling to the illusion of control.”

Everything Epic representatives met with Lott at Gen Con 2016, and after playing the game, they agreed that Coma Ward was a perfect fit for their brand. President Chris Batarlis enthused, “With every turn, Coma Ward drew us further into its immersive narrative. It offers players a myriad of ways to interact with the environment and each other without getting bogged down in arcane rules. We knew right away that Coma Ward has that special something — that epic-ness — that makes it a natural fit in our catalog.” Vice President Jim Samartino agreed. “The first time I played Coma Ward, it gave me nightmares. I knew then that it was a truly gripping experience — one we can’t wait to share with the rest of the tabletop community!”

The base game includes over 30 unique rooms to explore, a highly thematic map gameboard, 20 dice, and 8 *sealed and secret* scenarios, called Phenomenon. More content will be added to the game as the Kickstarter meets its various stretch goals. There are three pledge levels to choose from in the campaign from a $50 core pledge, to a $75 mid-ranged pledge with an expansion, as well as the $100 premium pledge with all the shiny bells and whistles.

Coma Ward will mark Everything Epic’s “Lucky 13th” Kickstarter campaign, most recently successfully funding their independent space epic board game, Secrets of the Lost Station. Big Trouble in Little China the Game is for Pre-Order now on www.BigTroubleGame.com and Rambo the Board Game will be coming to Kickstarter as the 14th campaign in January of 2018! (www.RamboGame.com)

If you aren’t scared, then check out their campaign.  They are already fully funded and it’s reasonably priced.  While you won’t be able to play it this Halloween, it’s something to look forward to next year.