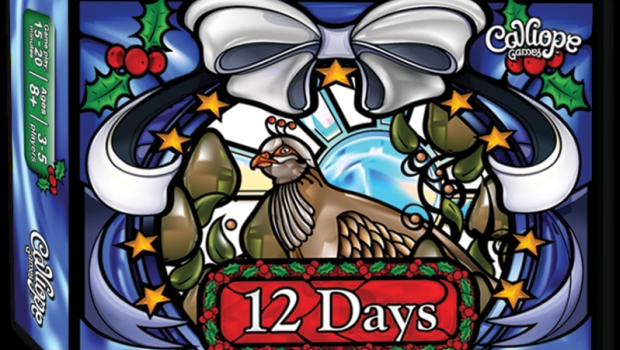 You can pick your friends but you can’t pick your family.  Sometimes holidays can get awkward when you have to spend time with your family for extended periods of times.  Sometimes games can help, but they can’t be too complicated.  Calliope Games has great games for the entire family, and they have added a new trick-taking game to their stable called 12 Days.

12 Days got its start with Gamesmith on Kickstarter in 2012, when just over two hundred people raised more than $6,000 to make the game a reality. Upon its release, 12 Days became an immediate hit as a Christmas-themed filler game. It even appeared on a special Christmas episode of Wil Wheaton’s TableTop.

“Today we’re here to save you from that awkward family dinner with a pair of delightful games that are simple to learn, quick to play, and accessible to everyone from little kids to cynical adults,” touts Wil Wheaton of both 12 Daysand Qwirkle.

12 Days eventually switched hands from Gamesmith to Lone Shark Games, who licensed the game to Calliope for publication. “I’ve loved 12 Days and wanted it for Calliope since it came out in 2013,” says Ray Wehrs, President of Calliope Games, who regards Santa as one of his greatest heroes. “Everything that made it a good fit for TableTop — great art, simplicity, ease of play, and accessibility by kids and non-gamers — also made it an ideal fit for Calliope’s line. My hope is that it will bring other families the same joy it brings mine every year.”

Part of what drew Calliope to 12 Days is the loving portrayal of each verse of “The Twelve Days of Christmas” created by renowned art nouveau artist Echo Chernik. “I loved creating the art for 12 Days,” says Chernik. “It was designed to be in a festive, stained-glass style, with cheerful colors reminiscent of the holiday season. The stained glass is reminiscent of candy and lights that adorn that time of year.”

Calliope upgraded 12 Days’ components with a sturdier box and linen-finish cards that better compliment the game’s elegant artwork and design. The rules have also been streamlined to improve clarity, accessibility, and looks without changing the original gameplay.

In 12 Days, players bid for the 12 days of Christmas with each of the gifts “my true love gave to me” — twelve drummers drumming, eleven pipers piping, ten lords a-leaping, all the way down to a single partridge in a pear tree. The number of the gift indicates how many of each card is in the deck; there are five golden rings, four calling birds, and so on. The player bidding with the rarest, lowest-valued gift wins that day’s points, and the player with the most points at the end of the game wins.

12 Days will be available at friendly local game stores shortly after Thanksgiving.

Sounds like a fun trick-taking game that ties into Christmas well.  Don’t get lost in the cold and look for 12 Days in December.