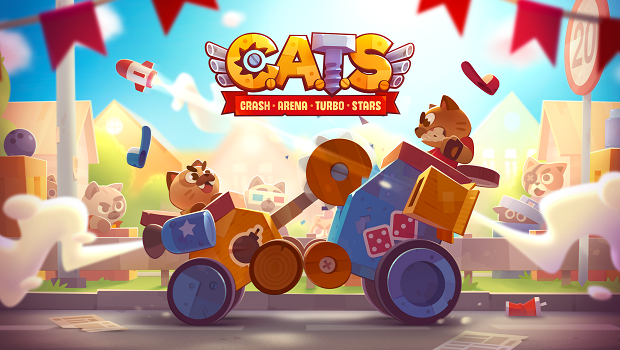 ZeptoLab, creator of Cut the Rope, announced its new multiplayer game, C.A.T.S.: Crash Arena Turbo Stars, to be released on mobile devices later this month. The free-to-play game will pit players against each other as they customize battle cars to go head-to-head in different action-filled fights.

“We love to mix different genres, experiment with game mechanics and themes. C.A.T.S. is a perfect example of this approach. It’s fun, innovative and cute — exactly what you would expect from a ZeptoLab game,” said creative director Semyon Voinov. “As kids, many of us loved building tanks and battle cars from the stuff in our backyards to create epic toy battles, so we thought — why not turn it into a mobile game? And to make things even more fun, we decided to man our bots with cute (but highly competitive!) kittens. Who doesn’t like machines, explosions and cats?”

Taking the role of a street cat, players will start their journey as they upgrade their wooden car to equip an arsenal of silly yet deadly weapons and gadgets, from chainsaws to pop bottles. The main goal is to reach the Crash Arena, and that means fighting your way to the top with your car.

Players can pre-register for the Android version of the game here. Stay tuned for more news on Gaming Trend.