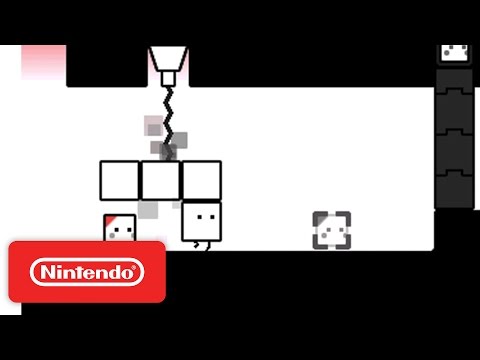 During today’s Nintendo Direct live-stream, Nintendo announced its third installmant in the unassuming BOXBOY! series, BYE-BYE BOXBOY. The game is already available on the 3DS eShop!

BOXBOY! is a quaint minimalistic puzzle-platformer series in which Qbby (a little sentient box) duplicates itself to solve puzzles. In this iteration, which is said to be the last game in the BOXBOY! “trilogy,” an array of new abilities will be introduced to the game’s puzzle systems. In the trailer, we see Qbby using blocks with jets attached to them (to reach those hard-to-reach switches), teleporting blocks, and other super-capable blocks to solve puzzles.

The game will also see the first NPCs of the series (!) in the form of little cubic toddlers, or “Qbbabies,” which Qbby must guide through various—you guessed it—puzzles.

BYE-BYE BOXBOY! is available only on the 3DS eShop, joined by its predecessors BOXBOY! and last year’s BOXBOXBOY!, which we featured on our list of 2016’s best puzzle games. A demo of all three games is currently available for 3DS and New 3DS on the eShop.