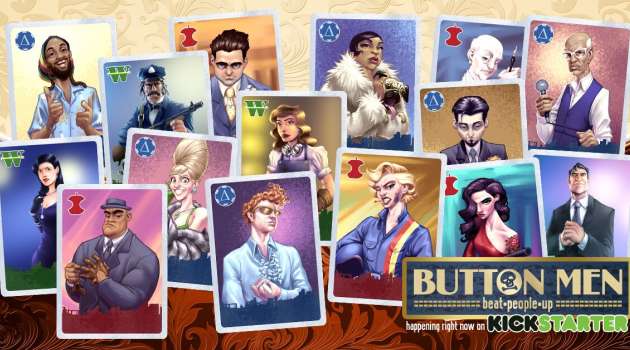 Apparently almost anything can be made into a game.  At one time Cheapass Games made a game using pin-back buttons.  Now they are bringing back that game as a dice and card game, and it’s now on Kickstarter.

After more than a decade-long hiatus, the classic Cheapass game Button Men is back! Button Men is a quick-playing strategic dice game about beating people up. When it released in 1999, it won Origins Awards for both game design and graphic design and attracted a huge following. Over the next several years, the library of Button Men characters grew to over 300, including original and licensed characters.

“Button Men is one of my favorite designs,” says inventor James Ernest. “My goal was to come up with a system where large and small dice could be fairly balanced against each other.”

Button Men were originally sold as pin-back buttons. In order to offer an expanded selection of characters at an affordable price point, Cheapass Games is converting Button Men to a deluxe card and dice game. Set in Fight City, a fictional 1950’s gangster town located somewhere on the Gulf Coast, the new Button Men game features four warring factions, each with their own style of play. (Since a “button man” is a low-level gangster, the name still fits without the buttons.) While the components are changing, the rules are not; all previous Button Men characters are compatible with the new set.

Button Men Kickstarter levels range from a $15 pack of promo items to a limited $485 level offering backers the chance to be drawn as Button Men characters by game artists Cheyenne Wright and Nate Taylor. While Button Men will release in its new card and dice format in retail stores later this year, Button Men fans will also be able to get their favorite characters on pin-back buttons.

Interested gamers can learn more about Button Men on the Cheapass Games website. The Button Men Kickstarter campaign closes on Friday, May 26th.

It sounds like an interesting concept, and while the art shown isn’t final, it looks great.  There’s plenty of levels for backers, from those who have the original game to those who want everything in the new set.  Check out the Kickstarter for more information.