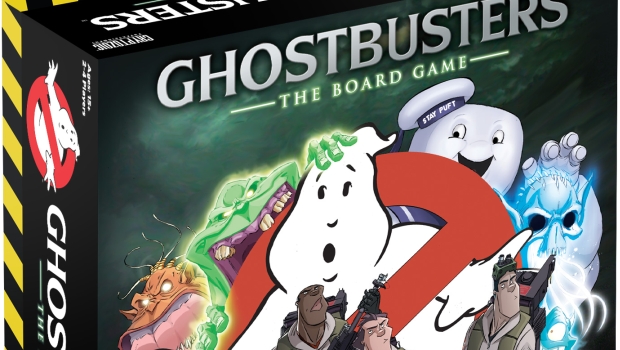 Ghostbusters: The Board Game had a hugely successful Kickstarter campaign.  Considering the Ghostbusters haven’t had any original tv series or movies since The Real Ghostbusters cartoon ended in 1991, it seems like people still crave to go after Slimer.  If you weren’t able to get in on the Kickstarter, Cryptozoic has announced that the retail version will be available in October.

Following on the heels of the tremendously successful Kickstarter campaign for Ghostbusters™: The Board Game, comes the retail consumer edition. The first officially licensed Ghostbusters tabletop game in nearly 30 years will be distributed to retailers in October 2015. Initially offered by Cryptozoic Entertainment via Kickstarter to an overwhelming response, the game will be released through both hobby and mass-market channels at a retail price of $85.00.

Ghostbusters™: The Board Game is a game for 1-4 players, ages 15 and up. Players choose one of the four Ghostbusters character figures (Peter Venkman, Egon Spengler, Winston Zeddemore and Ray Stantz) and then select from one of the game’s pre-written scenarios, beginning a game session that lasts from 30 minutes to 2 hours, depending on the chosen scenario(s) and degree of difficulty. Each of the Ghostbusters has unique traits and talents that can assist the entire team, with highly cooperative gameplay. As players gain experience from banishing spirits, the Ghostbusters level up, gaining new abilities that help them take on greater challenges. The team can also hop in the Ecto-1, the Ghostbusters’ converted ambulance, to help them quickly move through the city.

Developed by a talented group of board game professionals with decades of combined experience, the team is led by Matt Hyra (Lead Game Design & Acquisitions), Mataio Wilson (Associate Game Designer) and Adam Sblendorio (Vice President, Creative) along with additional developers and support from skilled playtesters and the passionate family of Ghostbusters fans.

To see early renderings, figure models and for more information about the game, please visit:  http://cryptozoic.com/ghostbusters™-board-game

Ghostbusters™: The Board Game comes with plastic figures of the four Ghostbusters as well as Slimer, Stay Puft Marshmallow Man, Indulnas and numerous Galloping Ghouls, Gruesome Twosomes and Boogaloo. All figurines are based on the artwork and designs of Dan Schoening, the artist of IDW’s Ghostbusters™ comic book. The game will come with over 40 figures, with the opportunity to purchase add-ons and exclusive figures. The board itself is made of double-sided modular pieces illustrated by Robb Mommaerts, increasing the replayability for scenarios and customization.

I’m looking forward to checking this out when it is released, and I’m glad to see that they created a cooperative game so that everyone can get in on the fun instead of trying to beat each other.  October should be the perfect time to release the game right around Halloween.