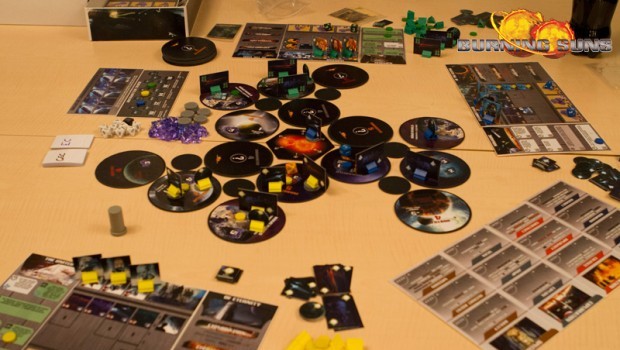 The projects on Kickstarter range from the simple to the ambitious.  While some are more successful than others, it is interesting to see the new ideas coming out.  I just found out about Burning Suns, and I have to say that it looks pretty good.

Burning Suns takes you to a distant galaxy where over 300 empires are fighting for supremacy after having lived together for over a 1000 years. War is inevitable and you’ll need to use your leaders to perform tactical manoeuvres, engage in diplomacy as well as warfare and sabotage.

The creator is looking for £40.000 to finish the production of the game, containing over 400 components. But besides the financial support from crowdfunding, the creator Emil Larsen is also looking for the “crowd”  (backers) who can help him finalize the game by doing extensive play testing towards balancing the game for tournament play.

It sounds like he is taking a bit of advice from the indie community and getting the feedback of backers before it is released to the general public.  With a heavy space theme and tons of options, this could be a project to watch.  You can find the Burning Suns Kickstarter page here.  Take a look and check it out for yourself.