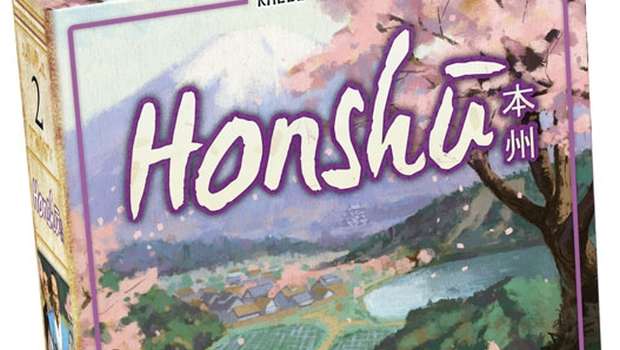 Renegade recently published Lotus, a beautiful game about flowers with Asian flare.  It looks like they’ll be continuing the art style with similar sensibilities when the publish Honshu for North American audiences.

Renegade Game Studios™, the premier publisher of original games has partnered with Lautapelit.fi, a leading Finnish publishing company, to release a Honshu, a city building card game, in North America.

After a successful launch at Internationale Spieltage in Essen, there has been increasing demand for the title in the American market.

Honshu is a map-building card game set in feudal Japan. Players are lords and ladies of noble houses seeking new lands and opportunities for fame and fortune.

One game of Honshu lasts twelve rounds, and each round is divided into two phases. First, map cards are played in a trick, and the player who played the highest valued card gets to pick first from those cards played. Then the players use the map cards picked to expand their personal maps. Each player must expand their personal maps to maximize their scoring possibilities. Manipulating your position in the player order is crucial for mastering Honshu.

“We are always on the lookout for games that are incredibly easy to learn but offer a deep and fulfilling experience. Honshu fits this description perfectly. ”  says Renegade President Scott Gaeta.  “We are excited to bring this elegant game to our fans in North America thanks to the wonderful team at Lautapelit.fi.”

Look for Honshu at friendly local game stores in North America and online.  Honshu takes about 30-40 minutes to play and is for 2-5 players ages 8+.

Asmodee published several Lautapelit.fi games, including Eclipse and its expansions.  Renegade publishing Honshu is a huge coup for them.  There’s no date listed in the Press Release, but hopefully it will be soon.