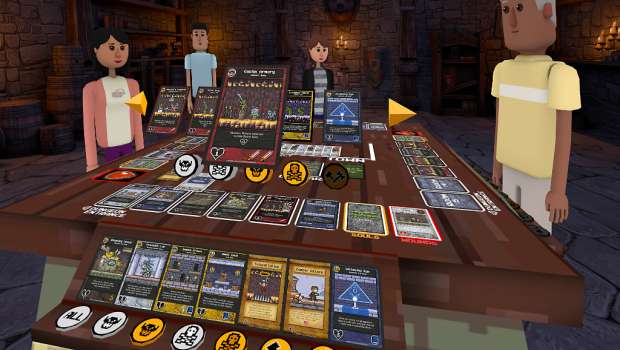 The Boss Monster series has two big box games and a couple of expansions.  Sometimes it’s hard to get people to play with you though, so the guys at Brotherwise Games are bringing Boss Monster to VR headsets.

Brotherwise Games announced the convention premier of the Virtual Reality (VR) version of their hit tabletop card game, Boss Monster, at this year’s GenCon, Aug. 4-7 in Indianapolis. “For the first time, convention goers will be able to experience a tabletop game in virtual reality,” said Chris O’Neal, CEO of Brotherwise Games. “GenCon attendees will be able to stop by our booth, strap on a VR headset, and experience the potential of VR to transform the way we game.”

Brotherwise partnered with VR pioneer AltspaceVR (Redwood City, Calif.) to bring Boss Monster to the virtual table. AltspaceVR made waves in the gaming community in 2015 with their VR Dungeon & Dragons sessions, but Boss Monster VR represents the first virtual reality version of a tabletop game with complex pieces, cards, and interactions. “We were blown away with the fidelity of the VR experience,” continued O’Neal. “It really looks, sounds, and feels like you’re sitting in an old tavern, playing Boss Monster with a group of friends.”

The tabletop game market has been experiencing double-digit growth for several years, and the population of gamers continues to grow. VR offers a new frontier for game developers, and AltspaceVR allows multiple people to be together in virtual space, which is ideal for tabletop games. “The VR gamespace is fascinating for us as publishers,” said O’Neal. “We imagine a time when anyone, anywhere can play our games; whether they’re disabled, homebound, deployed overseas, or just in a different town from their traditional gaming group, the possibilities to engage new gamers are just too exciting to pass up.”

The game is already available online. To sign up, sign in, and play, go to altvr.com/bossmonster. Boss Monster can be played in AltspaceVR in full VR mode using Oculus Rift, HTC Vive, or Samsung Gear VR. Players without VR devices can play Boss Monster in desktop mode on their PC or Mac, using an audio headset with a microphone.