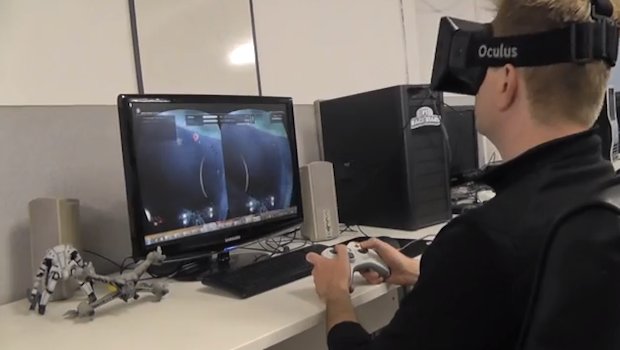 One thing that’s been causing quite a stir around the gaming industry has been the gradual introduction of the Oculus Rift virtual reality headset, which aims to provide gamers with the intense immersion that we’ve basically always dreamed about. Well, we’re one step closer to living in that “reality,” with new games announcing their upcoming compatibility with the set all the time. One such game, Strike Suit Zero, an indie title from development studio Born Ready Games, aims to take the indie space-sim market by storm with their contribution to the growing movement, with plans to release an Oculus-compatible version as early as this summer.

Strike Suit Zero, as you may know, has been hailed as a highly entertaining dogfighting sim for gamers on a budget, and came into existence after running a highly successful Kickstarter campaign. They’ll bankroll the Oculus VR version by allowing backers of the original project to add a mere $1 to their original pledge. The developers feel that the headset will be perfect for a space-fighting game, and they released a great video today (see below) that details some of the process that led to this point for the game, along with some cool behind-the-scenes footage and more. Naturally, it will allow you to turn your head to look in every possible direction, while employing standard controls, whether PC or console, to provide the most immersive experience this side of the Milky Way.

If you happen to be in Paris from May 25th to 26th, you can catch Born Ready Games at the Palais des Congrès de Paris-Est Montreuil, where they will be demonstrating a hands-on version of Strike Suit Zero for the Oculus headset to lucky gamers in attendance. Check out the video below, and feel free to revisit our reviews of both Strike Suit Zero and Strike Suit Infinity to learn a bit more about the games themselves.