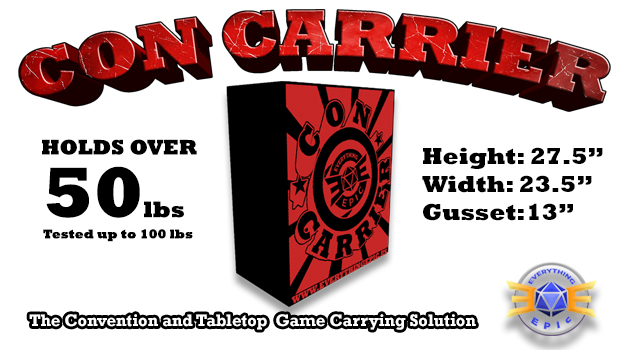 Going to Gen Con is an experience.  It’s usually crowded with people going through the exhibition hall.  People have gotten creative how they carry their purchases.  Some use cloth bags.  Others use fabric carriers.  The hardcore use wagons or carriers.  Now Everything Epic Games has created a bag specifically for this issue, the Con Carrier.

The Con Carrier is the product that was developed out of a challenge we had going into Gen Con 2016. We had just launched our new 2nd Edition Secrets of the Lost Tomb Core Game and new Expansion and we also offered another 6 other expansions, 5 boxes of miniatures, and a dice box!

We had a challenge… we wanted to offer all of these amazing game items but needed a way for fans to carry their boxes of stuff away! So we decided to create a large custom bag for Gen Con to offer to our fans so they could carry everything around the entire convention in one bag.

The bag was a hit! Fans loved having a huge bag to carry our products in as well as other purchases that they made during the convention. They even told us how excited they were to use the bag to take games to and from their game group.

So we immediately went to the drawing board and decided to improve our original design with the game and the gamer in mind! And so the Con Carrier was born! We took our original concept and design for the bag and designed major improvements. Primarily the sizing and the carrying strap. We created multiple prototypes for a printed and eye-catching graphic design and had the new bag prototype created. We’ve tested the new bag and filled it to the brim with the biggest and heaviest games we own in our personal collection.

If you want one of these, then you can check out their Kickstarter page now.  It’s an inexpensive solution and it looks like a great way to carry your games to game night as well as conventions.