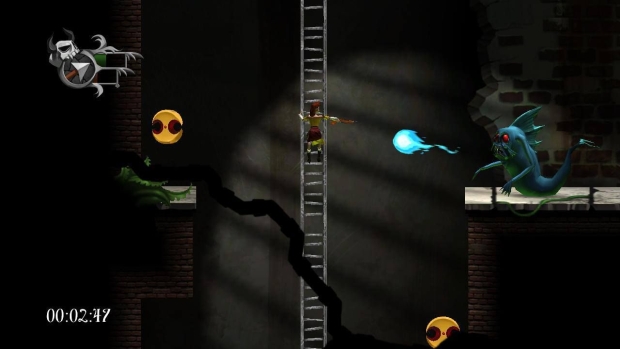 As you may know, Midnight City (a new indie-focused publisher) yesterday announced that they were bringing Slender: The Arrival to Steam. They’re keeping the ball rolling today by revealing that they will also be bringing a game called “Blood of the Werewolf” to Steam on October 28th. The upcoming product is a 2D platformer which is a “homage to the hardcore platformers of yesteryear.” There also seem to be some horror elements, which always piques my interest.

Blood of the Werewolf centers on Selena, a woman leading a dual life as a loving wife/mother and one of the last werewolves alive. Her husband murdered, her child kidnapped, Selena sets out with nothing more than a crossbow and a thirst for vengeance. Traverse ten exciting levels and five boss battles as you seek out your son, held captive by the one and only Dracula. Experience dynamic gameplay using Selena’s crossbow to thwart enemies from a distance, while bringing the fight up close and personal in werewolf form – instantly transforming by the light of a full moon. Full air controls add to precision jumps – with a special double jump for werewolves only. Fully upgradeable weapons and hundreds of hidden collectables await you along your journey. Discover ancient talismans to unlock the true power and potential of your werewolf abilities. Online leaderboards track your best time, number of deaths and level ranks to support bragging rights and competition with friends. Don’t forget to keep your eye out for fireflies; they often lead to special hidden surprises!

Blood of the Werewolf will be coming to Steam on October 28th for $9.99, with a console launch planned for some time in 2014.