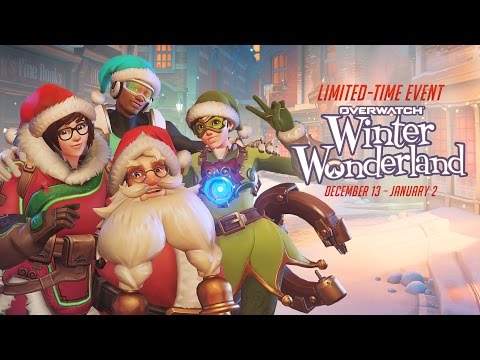 Winter is coming, and so are the skins! Blizzard has announced what players can expect from the next updates for Overwatch, Heroes of the Storm, and World of Warcraft.

Starting with Overwatch, this month features a 6v6 single-elimination brawl. As the winter-disposed Mei, players square off in a super-powered snowball fight. One hit and you’re out. Also coming with this update are holiday-inspired skins, emotes, sprays, etc. Overwatch’s “Winter Wonderland” lasts from December 13 through January 2.

For Heroes of the Storm, an assortment of skins will be coming with the 2016 Winter Veil bundle, including a Gingerdread Skin for Nazeebo and a Wenter Veil skin for Lunara. Blizzard is also offering past Winter Veil skins and accessories with the Winter Veil Classic bundle.

Multiple mounts are also coming with the bundle, including the Festive Treasure Goblin Mount, which will be rewarded to players after finishing 25 games (excluding Heroes Brawl mode). Completing 25 games will also earn players a Special Snowflake portrait. The Winter Veil bundle and all relevant content will be available from December 14 through January 4.

Lastly, World of Warcraft will be receiving a slew of new quests within the Ironforge and Orgrimmar areas with the arrival of Greatfather Winter. Rescue Metzen the Reindeer from the Abominable Greench, drink some Winter Veil Egg Nog, and enjoy your six complimentary daily gifts starting December 25.

In addition, players can purchase Mischief, the feline companion. from the Battle.net shop. Greatfather Winter will be sticking around the World of Warcraft from December 16 through January 2.