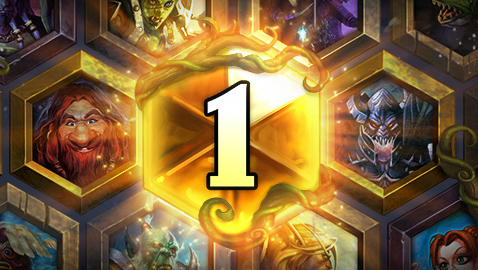 Since last year’s Hearthstone expansion Whispers of the Old Gods, Blizzard’s official tournaments for its digital collectible card game have been formatted to only feature card sets released within the last two years, called Standard format. Any cards released outside the two-year mark are relegated to the Wild format, a separate play space from Standard for those who wish to construct decks using any cards released since the game’s launch.

Last week, Blizzard announced via Twitter that it will be hosting an official Wild Tournament and that the top 64 players on the Wild ladder can qualify.

?? GO WILD! ?? The top 64 from Ranked Wild in May can qualify for an upcoming official Wild Tournament! More info to come. pic.twitter.com/9iwyHKgGIT

Hearthstone’s Standard format was implemented last year to 1) help keep the variety of constructed decks in play fresh; and 2) allow new players a fair chance to catch up to veteran players (who, no doubt, have every card since the game’s launch). This year’s recent Standard format rotation (the format shifts annually with the first expansion of every year) proved to revitalize the game, as the last several months had been dominated by two particularly overpowered Shaman and Warrior deck archetypes. With this tournament announcement, however, Blizzard seems to be betting on Wild becoming a viable space for professional-grade competitive play.

Blizzard has yet to reveal any further details on the upcoming tournament. For more on Blizzard’s excellent collectible card game, check out our Let’s Play of Mike Pearce’s first match.