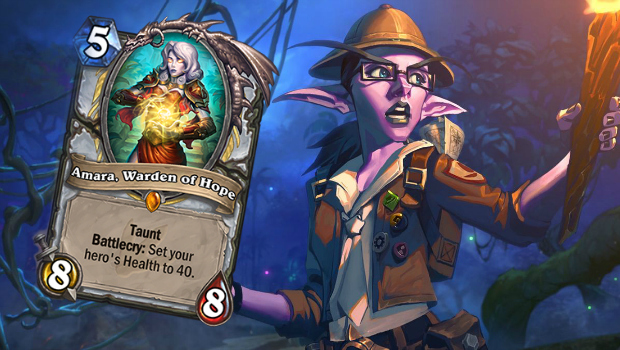 Blizzard has revealed its next Hearthstone expansion, Journey to Un’Goro, and some of the major changes it’s bringing to the game.

Nearly every Hearthstone expansion released since the game’s launch back in 2014 has introduced at least one new mechanic and/or card keyword within its 30 to 130 new cards, normally resulting in a drastic shift in the game’s meta and its play “feel.” In this respect, Journey to Un’Goro could prove to be the biggest game-changer since Hearthstone’s release, with new mechanics like Elemental minions, the new Adapt keyword, and in-match quests.

A new minion type called Elemental will be introduced with the expansion. Like other minion types (e.g. Beast, Murloc, Mech, and Pirate), Elemental minions will receive synergistic benefits. Along with new cards from the expansion, some already existing cards like Ragnaros the Firelord, Unbound Elemental, Magma Rager, and Baron Geddon will be branded with the new Elemental classification.

Similar to the discover mechanic, you will be presented with three options when you play a card with Adapt. You can choose one of these three options to immediately buff your minion. There are ten total Adaptations to choose from, so you’ll have plenty of options to respond to threats presented by your opponent.

Some of the buffs that will be available to minions with Adapt include Windfury, Taunt, Divine Shield, and a +3 attack buff. Blizzard has yet to reveal all ten Adapt buffs. We also don’t know yet whether these three presented options (a la Discover) will be randomized or specific to each minion. (It is possible that, by “like Discover,” they are implying buffs will be offered randomly.)

Arguably the most progressive addition coming with Journey to Un’Goro is the new Quest card. These cards function similarly to Hearthstone’s quest system, though they are activated in-game. Upon playing a quest card — a one-mana Legendary spell that is automatically placed in the player’s opening hand — the player is commissioned to fulfill a quest during the duration of that match. One Quest card for the Priest class, Awaken the Makers, tasks the player with summoning seven Deathrattle minions. As a reward, the player will receive the new Legendary minion Amara, Warden of Hope.

Conventionally, Amara is a severly overpowered card considering its AP, HP and Mana cost. Throw in a Battlecry which sets your Hero’s health to ten points above max health, and you’ve got yourself a game-breaking card. Of course, this overwhelming value is mitigated by the requisite of drawing and summoning seven specific minions before drawing this bad mama jama.

Blizzard’s first Hearthstone expansion of last year, Whispers of the Old Gods, saw similar mechanics with its Legendary minions. Cards like C’thun and Yogg-Saron, Hope’s End required certain cards to be played beforehand in order to get the most value out of their abilities. However, these “Old Gods” cards didn’t necessitate card play in the same way these new Quest cards will.

Journey to Un’Goro is expected to drop early this April, and with it begins the Year of the Mammoth — Hearthstone’s second annual Standard format rotation. At the start of the new rotation, Blizzard will retire Classic cards Azure Drake, Ragnaros the Firelord, Sylvanas Windrunner, and more.