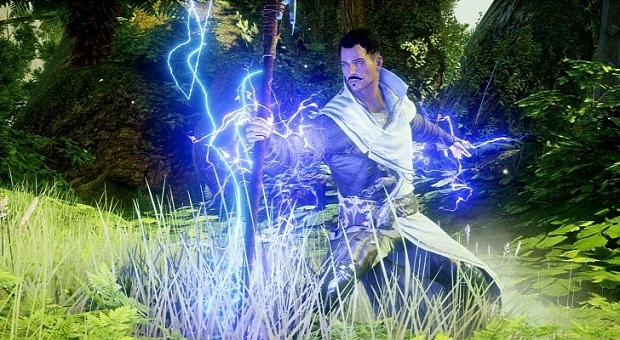 Dragon Age: Inqusition, Bioware’s third installment in the Dragon Age series, features many returning characters, but also a new cast of companions for you to get to know. When we attended E3 earlier this month, we were treated to a demonstration of Dragon Age: Inquisition at EA’s booth and in that demo we were introduced to a character named Dorian. Bioware is now showcasing Dorian, and a lot of new information has surfaced in the process.

In an extensive interview with series writer David Gaider, quite a bit of insight into Dorian’s past, present and future.

Gaider describes Dorian as a mage from the Tevinter Imperium, where mages essentially rule the land, but he has rejected the life of a Tevinter Imperium magister, believing it ultimately leads to one’s corruption. Despite leaving Tevinter, being raised in such a society means Dorian has picked up on some skills in coercion and wit, according to Gaider.

“Dorian is smart—perhaps too smart for his own good, really. He was raised in a society where both intelligence and wit are prized, where advancing yourself socially means outmaneuvering your peers, and he does so quite well… or, at least, he would if he didn’t see through it all. That’s left him rather jaded and sarcastic, naturally.”

Being a magister means that Dorian is apt in magic, but is also unlike mages elsewhere in the world of Thedas, as he hasn’t been taught to fear his abilities or hide them.

“He enjoys using his magic and doesn’t see any reason why he should be ashamed about it. So he unleashes his full power when it’s needed… and he has plenty of power to unleash, seeing as he comes from a society where mages are trained to use it rather than hide it. This includes powerful elemental spells, as well as spells involving the control of spirit and the dead—things societies outside of Tevinter might turn up their noses at and claim ‘distasteful.'”

Despite the corruption he has seen in his homeland, Gaider says that Dorian believes that Tevinter is not an entirely lost cause.

“He doesn’t believe that the situation in Tevinter is beyond repair, despite how impossible it seems that he personally might be able to do anything about it. Dorian has a streak of idealism hidden beneath his sarcasm, which naturally can lead him to be all the more disappointed when the world does exactly what he suspects it’s going to.”

Alongside all of Dorian’s background, Gaider confirmed that Dorian will be a romance option for players who are playing as a male Inquisitor. Dorian is the first homosexual romance option in the Dragon Age series to be exclusively available for male characters, where options in the previous games were all bisexual and available for either gender.

“Dorian is gay—he is, in fact, the first fully gay character I’ve had the opportunity to write. It added an interesting dimension to his back story, considering he comes from a place where “perfection” is the face that every mage puts on and anything that smacks of deviancy is shameful and meant to be hidden. Dorian’s refusal to play along with that façade is seen as stubborn and pointless by his family, which has contributed to his status as a pariah.”

Dorian is not the first character Bioware has showcased for Dragon Age: Inquisition, having recently revealed some tidbits about Sera, an elf who fights as a rogue.

Dragon Age: Inquisition is slated for release on October 7th for PC, PlayStation 3, PlayStation 4, Xbox 360 and Xbox One.