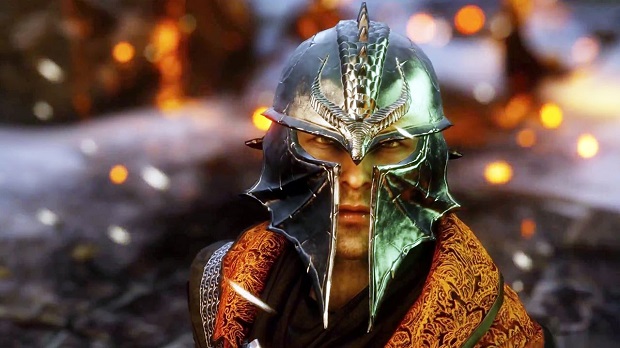 Bioware has released patch notes for the next Dragon Age: Inquisition update.

Through a post on the studio’s blog, Bioware lists out the fixes and tweaks that will be found in the patch, such as the inclusion of party storage and the ability to alter the size of subtitles. The post also confirms that Inquisition’s own version of the Black Emporium will be featured in a future update.

Fixed the walk toggle to be framerate independent.
Fixed an issue that allowed characters to take damage while using the Counterstrike ability.
Updated abilities to function correctly with front armor rating.
Fixed the Charging Bull ability so that AI-controlled characters no longer overshoot their target.
Removed the initial barrier that spellbinders receive when spawned.
Added an option to control the font size of subtitles.
Improved archer AI so that they choose to enter melee combat less often.
Fixed the save game card image for elf mages.
Removed the connection between mesh quality and shader quality and added a Shader Quality setting to the Graphics options.
Fixed an issue that caused certain operations to disappear from the war table without direct player interaction.
Fixed a crash after use of a Tactician’s Renewal amulet in Skyhold.
Fixed a conversation where Leliana references being with the Warden to face the Archdemon when she was set to have died in the imported Dragon Age Keep world state.
Fixed a case where movement audio was muted after a level transition.
Fixed a case where music unintentionally played after a level transition.
Fixed a loot exploit.
Fixed a case where the Quarry Quandry quest could be prevented from being completed.
Added party storage to the Undercroft in Skyhold.
Added item tinter to the Undercroft in Skyhold.
Fixed terrain patches popping while moving on low and medium settings.
Prevented a change to the Gamepad control scheme if a compatible gamepad is not connected.
Allowed changing the control scheme to Mouse + Keyboard when a compatible gamepad is not connected.
Temporarily change to the Mouse + Keyboard control scheme when a compatible gamepad is not connected, but Gamepad is the selected control scheme.
Improved stability.
Fixed the True Grit perk to apply to all party members.
Fixed flickering terrain when using SLI/Crossfire.
Fixed the issue where Qunari Inquisitors were able to equip the Inquisition Battlemage armor.
Single-player only: implemented auto-attack with mouse and keyboard controls, with a new key binding created for this purpose.
Fixed an exploit where certain abilities could be used multiple times before the cooldown was started.
Fixed an exploit with Explosive Shot where indirect hits were not causing the ability to cool down and reduce stamina.
Fixed cases of the new-item icon appearing on old items after salvaging in multiplayer.
Added an Option to increase the maximum zoom level when using the Tactical Camera.

Despite Inquisition’s success, Bioware won’t be releasing a new game in the series this year, and doesn’t plan to use the game as a template for other games moving forward.

Inquisition was recently recognized by the GLAAD for its portrayal of LGBT characters.

For more on the latest Dragon Age, check out two other’s conflicting viewpoints on the game’s portrayal of faith, from an Atheist’s point of view and an Agnostic point of view.