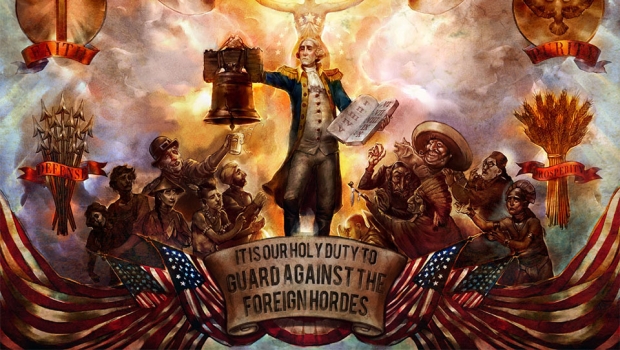 Bioshock Infinite comes out March 26th and Irrational Games revealed the full voice cast for this highly-anticipated title in a press release.

Irrational already announced that Troy Baker will play the role of Booker while Courtnee Draper will voice Elizabeth.

Hale will give voice to quantum physicist Rosalind Lutece in the game.  Hale’s widely known as the world’s most prolific female video game voice actor. Hale has voiced Lysandra in God of War: Ascension, Leah in Diablo III and Commander Sarah Palmer in Halo 4 to name a few. Vaquer will be Robert Lutece. He gave voice performances in Grand Theft Auto: Liberty City Stories, Dexter and The Warriors. Szarabajka lends his voice to military commander Cornelius Slate in Bioshock Infinite. Szarabajka is best known for his role as Detective Herschel Biggs in L.A. Noire. He also voiced several roles in The Elder Scrolls V: Skyrim as well.

VandenHuevel will play the role of Zachary Comstock, the leader of The Founders political party that founded floating Colombia. VandenHuevel has appeared on Parks and Recreation on NBC and will appear in HBO’s upcoming Liberace biopic “Behind the Candelabra” due out in May. Lobley will voice Jeremiah Fink in the game. he appeared in Bioshock 2 as well as Borderlands 2 and L.A. Noire among other games. Lobley is best-known for his role as Sparks, the communication officer from Sealab 2021 on Cartoon Network’s Adult Swim. Brooks voices Daisy Fitzroy in the game. Fitzroy is the leader of the Vox Populi. She is best known as Ashley Williams in the Mass Effect series of games and Barbara Gordon in Batman: Arkham Aslyum and Batman: Arkham City.

Bioshock Infinite is rated M for mature and will be released on PS3, XBox360 and PC.