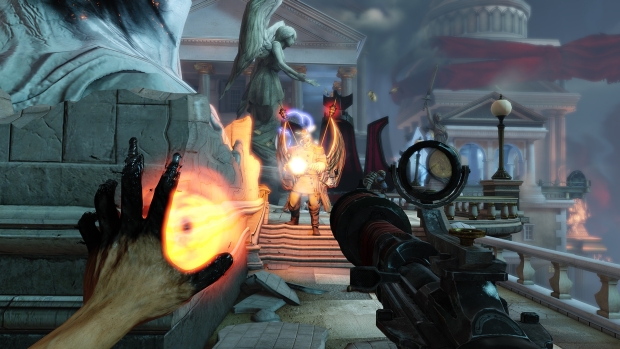 The Mac news continues to roll out as today it was revealed that 2K and Irrational’s “Bioshock Infinite” will be coming to Mac on August 29th for the same price as the PC version, $59.99. The sky-based first-person adventure made news recently as it launched its first DLC pack, “Clash in the Clouds”, and simultaneously announced a later DLC installment, “Burial at Sea.” The Burial at Sea content will be split into two parts and be focused on Booker and Elizabeth’s adventures in the underwater city “Rapture.”

From the post on GameAgent (Aspyr Games’ Mac store) announcing the Mac version of Bioshock Infinite:

Mac gamers can now pre-order the game from the GameAgent Store and other participating Mac game retailers.  In particular, when you pre-order BioShock Infinite for Mac from GameAgent you’ll get free access to the Columbia’s Finest DLC Pack, which includes: 500 Silver Eagles (in-game currency), 5 Lock Picks to help you navigate through Columbia, six unique Gear items, and two weapon upgrades: Comstock’s China Broom Shotgun and Comstock’s Eagle Eye Sniper Rifle. Additionally, GameAgent members are encouraged to sign into their accounts before checking out to find a coupon code on the BioShock Infinite page good for 20% off their pre-order!

Also, Aspyr tells Joystiq that Clash in the Clouds will be “ready on or very close to” the Mac versions release date on August 29th.