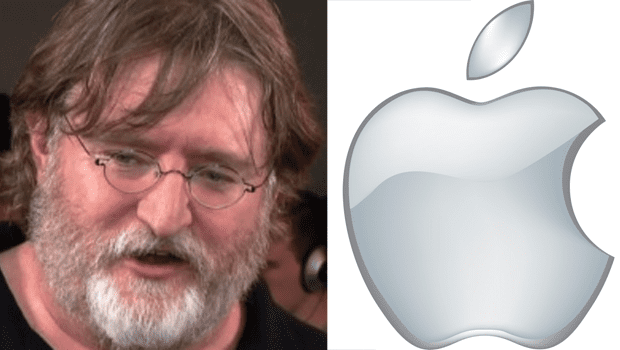 Gabe Newell’s vision for Valve’s entry into the hardware market continues to take shape. Polygon reports on a recent talk where Newell explained just what hopes he has for the Piston project, making it clear that he sees Apple, not console makers, as Valve’s front and center hardware competitor – with good reason. The interview sheds a lot of light on just what Gabe has planned for the Piston: he wants to have the standardized hardware of a gaming console while retaining the broad utility of a desktop PC, and beating the console price point on top of it all. Kind of like a Mac mini, with more of a gaming direction to it. Aggressive to say the least – and that also sheds some light on why Gabe’s seeing the competition lining up the way he does. More after the cut.

“The threat right now is that Apple has gained a huge amount of market share, and has a relatively obvious pathway towards entering the living room with their platform,” Newell said. “I think that there’s a scenario where we see sort of a dumbed down living room platform emerging — I think Apple rolls the console guys really easily. The question is can we make enough progress in the PC space to establish ourselves there, and also figure out better ways of addressing mobile before Apple takes over the living room?”

“I think a whole bunch of hardware companies are going to be releasing products in the next 12 months — you’ll hear it referred to as Miracast, [Project] Shield from Nvidia, or lots of other people,” Newell said. “There are going to be a huge set of products that say, ‘If you want something that’s incredibly cheap, at a price point well below anything that consoles will be able to reach, you’re going to take advantage of the PC that’s running somewhere in your house.’

“It’s like one of those things where afterwards it will seem like it was very simple, when beforehand, everyone sort of denied that it was possible,” Newell said.

Newell seems right on the money on this one. From a gaming standpoint, it looks like Valve has a leg up on Apple, whose success has largely been in the touch-screen markets lately. They’re a major player with phones and tablets as a result, but the moment you’re dealing with a device that involves sitting down in front of a large screen, you’re in the territory of buttons and controller sticks, if not keyboards and mice – territory that Apple’s been lagging behind on, and that Valve has been conquering consistently for a while where PCs are concerned. On the other hand, games aren’t everything – and Apple certainly has more experience in actual hardware production.

I think it’s still too early to tell whether the path Valve is walking on this one will ultimately lead to anything noteworthy, but the plan does seem to be coming together – and Newell is, in my book, second only to Steve Jobs when it comes to innovating and channeling market trends. Keep an eye on this project.