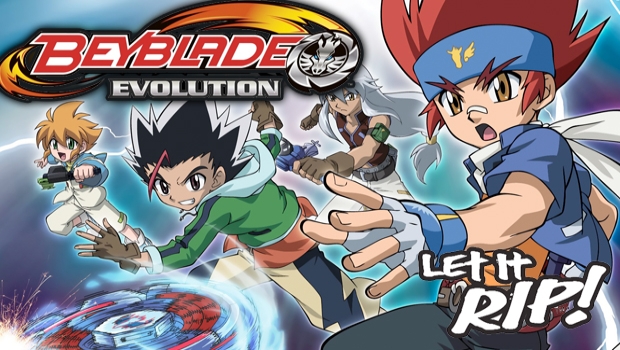 You may or may not have heard about BEYBLADE, but over 200 million toys for the series have been sold worldwide up to this point, and a brand new TV series just hit the airwaves too.  Today we’ve got the news that BEYBLADE: Evolution for the Nintendo 3DS has hit the shelves.  I’m pretty new to the series myself, so let’s dig into the announcement and see what it’s all about:

BEYBLADE is one of the world’s biggest brands, with 200 million toys sold worldwide to date, and the all-new anime TV series BEYBLADE: Shogun Steel debuted this fall to top ratings. Taking place after the Metal Saga, BEYBLADE: Shogun Steel features new characters, new spirits, and new battling experiences in an action-packed expansion of the smash hit BEYBLADE universe. BEYBLADE: Evolution includes elements from the new series and bridges the storyline between the Metal Saga and Shogun Steel, including an opportunity for players to unlock the next-generation Samurai Ifrit W145CF BEYBLADE Battle Top for use in-game.

Developed to take advantage of the unique capabilities of the Nintendo 3DS, BEYBLADE: Evolution lets players launch their in-game BEYBLADE, using the gyro and motion sensors and manipulating the viewing angle with the AR camera for precise control and adjustment. Players engage in real-time multiplayer battles or follow the Story Mode campaign unlocking new parts and information to fine-tune their tops in the Bey Factory. Battle your friends in the faithfully recreated virtual arenas, or in one of the brand new arenas. BEYBLADE: Evolution is also compatible with the new Nintendo 2DS handheld system.

The game is available as both a Collector’s Edition (with the exclusive, limited edition Wing Pegasus 90WF Battle Top) for $39.99 or the standard “Solus edition” for $29.95.  Both are available now.