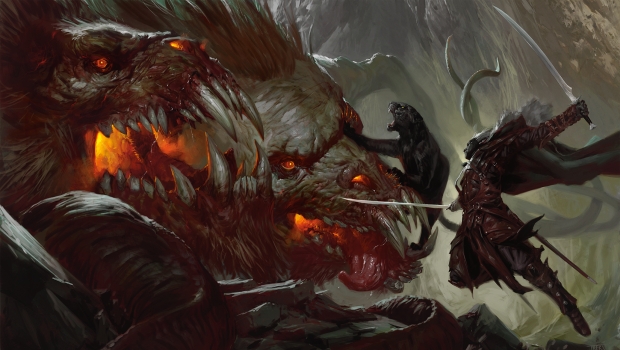 Wizards of the Coast has been doing a great job with creating a theme to tie their campaigns together.  The current set features the Temple of Elemental Evil, which has been a popular setting in previous D&D campaigns. However, they have announced their new theme, which features one of the most popular characters in D&D lore.

Today, Wizards of the Coast announced Rage of Demons, the new storyline for Dungeons & Dragons fans coming in Fall 2015. The demon lords have been summoned from the Abyss and players must descend into the Underdark with the iconic hero Drizzt Do’Urden to stop the chaos before it threatens the surface. Rage of Demons is the story all D&D gamers will be excited to play this fall, whether they prefer consoles, PCs or rolling dice with friends.

Following on the critically-acclaimed Tyranny of Dragons and Elemental Evil stories, Rage of Demons will transport characters to the deadly and insane underworld. Rumors of powerful demon lords such as Demogorgon, Orcus and Graz’zt terrorizing the denizens of the Underdark have begun to filter up to the cities of the Sword Coast. The already dangerous caverns below the surface are thrown into ultimate chaos, madness and discord. The renegade drow Drizzt Do’Urden is sent to investigate but it will be up to you to aid in his fight against the demons before he succumbs to his darker temptations.

Dungeons & Dragons fans will have more options than ever to enjoy the Rage of Demons storyline. The themes of treachery and discord in the Underdark are in Sword Coast Legends, the new CRPG (computer role-playing game) coming this fall on PC from n-Space and Digital Extremes. The epic campaign that drives Sword Coast Legends’ story forces players deep into the Underdark and continues well after launch with legendary adventurer Drizzt Do’Urden.

For fans of Neverwinter, the popular Dungeons & Dragons-based MMORPG will bring a new expansion – tentatively titledNeverwinter: Underdark – in 2015. The update will see adventurers travel with Drizzt to the drow city of Menzoberranzan during its demonic assault as well as experience a unique set of quests written by the creator of Drizzt, R.A. Salvatore. The expansion will initially be released on PC and will come out on the Xbox One at a later date.

Players of the tabletop roleplaying game can descend into the Underdark in Out of the Abyss, a new adventure which provides details on the demon lords rampaging through the Underdark. Partners such as WizKids, GaleForce 9 and Smiteworks will all support Rage of Demons with new products to help bring your tabletop game to life. To really get in the mind of Drizzt, fans will have to check out Archmage, the new novel by R.A. Salvatore, scheduled for release in early September.

“Rage of Demons is a huge storyline involving all expressions of Dungeons & Dragons, and we’re excited to bring players this story in concert with all of our partners,” said Nathan Stewart, Brand Director at Wizards of the Coast. “I can’t wait to see everyone interact with one of the world’s most recognizable fantasy characters: Drizzt Do’Urden. Descending into the depths won’t exactly be easy for him, and D&D fans will get their mettle tested just like Drizzt when they come face-to-face with all the demon lords.”

For more information on Dungeons & Dragons, including details on all of the new products supporting the Rage of Demons storyline from Wizards and our partners visit http://www.dungeonsanddragons.com

The Fifth Edition of D&D has been hugely successful, and the current adventures allow for characters from level 1 to level 15.  Prepare for more challenges with the demons this fall.