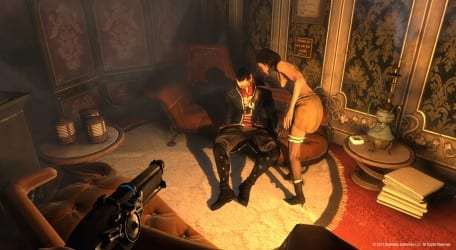 A new trailer has just been released for the upcoming first-person stealth action game Dishonored. The setting of the game twists normal perceptions of history by combining elements of the past, present, and future. Players take on the role of Corvo, a former guard of the Empress who seeks revenge after being framed for her assassination. Dishonored will feature relatively open-world gameplay with a focus on stealth. In fact, the developers have stated that every enemy and boss in the game can be defeated non-lethally. Check out the trailer after the jump.

Corvo has access to a variety of weapons, including swords, daggers, and guns, in addition to some supernatural powers like freezing time and taking control of animals. Dishonored is expected to be released later this year.  Watch the trailer below to see the Steampunk setting and stealth action gameplay at work.