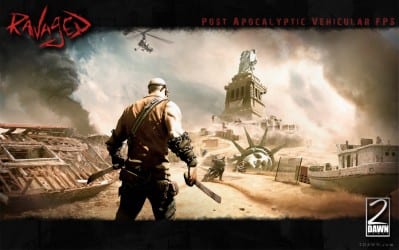 As someone who hopes to develop my own video games someday, I think what Kickstarter does is awesome. It lets developers get away from the money-fueled world of the big publishers, and just focus on making great games with support from the gamers themselves. The video after the break shows off one of the best projects to come out of the world of Kickstarter crowdfunding recently: Ravaged, developed by 2 Dawn Games. From their Kickstarter page:

The game is called Ravaged, a post-apocalyptic vehicular first-person shooter. Think Mad Max meets Battlefield where a group of resistance soldiers fight for humanity while scavengers look to control it all. The game features over 30 vehicles and weapons, amazing post-apocalyptic maps and 10 classes to choose from.

2 Dawn isn’t just interested in their supporters’ money; they’ve also been great at listening to their ideas. The behind-the-scenes video released today shows what they have been up to, and includes a sneak peek at the gameplay. Ravaged is expected to release for PC later this summer. Check it out: