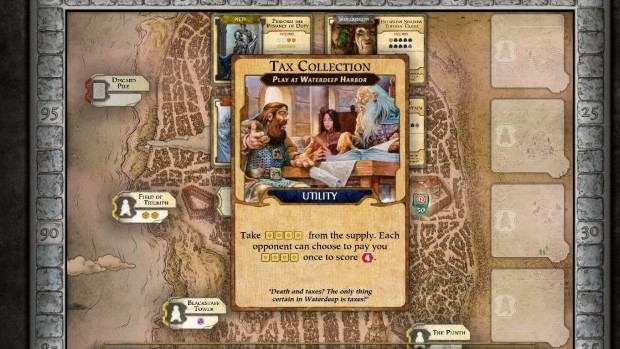 Worker placement games can be hit-or-miss for me personally, but Lords of Waterdeep is one of the best games that I have played that features that mechanic.  While they released an expansion for the game earlier this year, they have now given you a new way to play.  Playdek has now released it for all iOS devices.

In Lords of Waterdeep, two to five players assume the role of masked Lords controlling the intriguing city of Waterdeep, one of the most beautiful yet dangerous port cities in the Forgotten Realms. The Lords’ identity remains secret during gameplay so strengths won’t be visible to opponents. The masked Lords vie to purchase buildings and control the city by recruiting agents, whom they send on quests to gain power. Often employing shady dealings in the underbelly of the city and back alleys, the Lords, through their agents, negotiate and outwit each other to rule the city, its treasures and resources.

A strategic board game with worker placement mechanics, Lords of Waterdeep unfurls in eight rounds of action. At the end, the player with the most victory points wins. Agents must complete quests to score victory points and can expand the city by purchasing new buildings that open up new actions and either hinder or help the other lords by playing Intrigue cards to enact carefully laid plans.

This is a game that has been a hit to everyone that I have played it with.  It is simple to learn but has a lot of depth, with several options that make every decision interesting.  If you haven’t tried it out, this is a great way to try it out.  I just hope that the AI can handle the challenge, but Playdek’s record with board game conversions is outstanding.