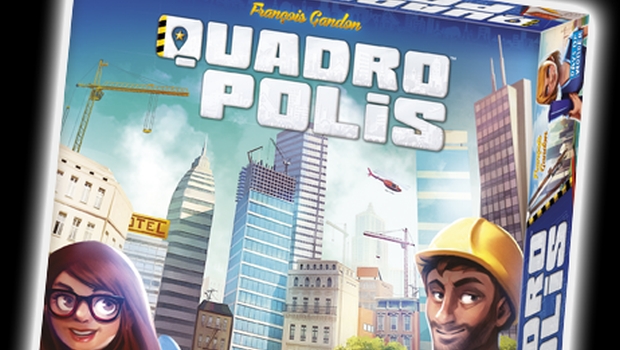 When Asmodee acquired the Days of Wonder brand, I wondered what would happen to it.  While they had a hit with Five Tribes, I wondered if we would just get a bunch of Small World and Ticket to Ride expansions.  However, it looks like Days of Wonder will be releasing a hit in the near future called Quadropolis.

​Today, Days of Wonder announced Quadropolis, winner of the International Game Designers Contest of Boulogne Billancourt, a new board game where players enact the role of the Mayor of a modern city.

In Quadropolis players send their Architects to the global Construction Site to have different buildings erected in their city, each of them allowing the player to score victory points. There are various types of buildings with different scoring patterns; many of them may be combined for better effect.

Players will have access to different strategies, depending on the buildings that are available to them. They will need to build tower blocks to provide their citizens with a place to live, parks for recreation, shops, public services… but also harbors and factories to ensure enough energy production. Each Mayor has to find the subtle balance for a nice modern city.

“Because of its simple mechanics, Quadropolis is accessible to everyone” said François Gandon, game designer of Quadropolis. “The idea of the game is to mix a strategic dimension – the long­term planning in a modern city – and a tactical dimension, such as the constraints that a mayor experiments with every day. As a result, players have to make important choices on each turn.”

Quadropolis is for 2 to 4 players ages 8 and older and takes approximately 30­60 minutes to play. It includes 142 Building Tiles, 1 Construction Site Board, 4 Player Mats & 4 Helpers, 20 Architects, 65 Inhabitants (blue meeples) & 50 Energy Units (red barrels), 1 Urbanist & 1 Mayor Figure, 1 Scoring Pad, 1 Cloth Bag and 1 Rules Booklet. Quadropolis is expected to be available in Europe early March and in the US early April at an expected retail price of $50/€45.

For more information you can visit the Quadropolis website at: www.daysofwonder.com/quadropolis

I got to play an early version of this at GenCon last year and was pleasantly surprised by it.  I’m looking forward to getting the final game to see if it still stands up.