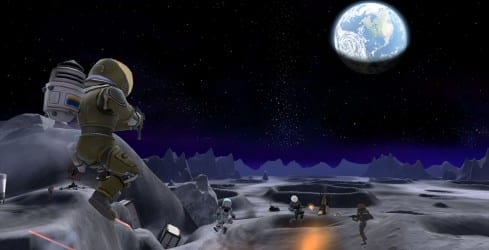 Yesterday, a whole host of new space-themed content was added to Battlefield Heroes, including a map called “Lunar Landing” set on the moon. Physics are altered on this map to let players experience the low gravity of the moon, and use it to their advantage during the battle. Whether base jumping into the enemy base or swapping out traditional guns for laser-powered weapons, the added content adds more variety to Battlefield Heroes’ third-person shooter gameplay.

In addition to the new map, Battlefield Heroes fans can now customize their Hero with brand new space explorer outfits, or gear up in full spacesuits before deploying for battle on the moon. Players will also have access to laser-based weapons for the first time in series history, allowing them to swap out their traditional guns and gadgets for high-powered plasma blasters to dish out damage. Battlefield Heroes is one of EA’s leading free-to-download, free-to-play games. With over 11 million registered players, the game features monthly content updates and a growing, vibrant community.

Battlefield Heroes is EA’s attempt to bring the Battlefield name to a more casual audience. It’s cartoon-like appearance and relatively easy to pick up gameplay certainly accomplishes that, but familiar elements and a steady stream of new content makes it appealing even to dedicated fans of the original.