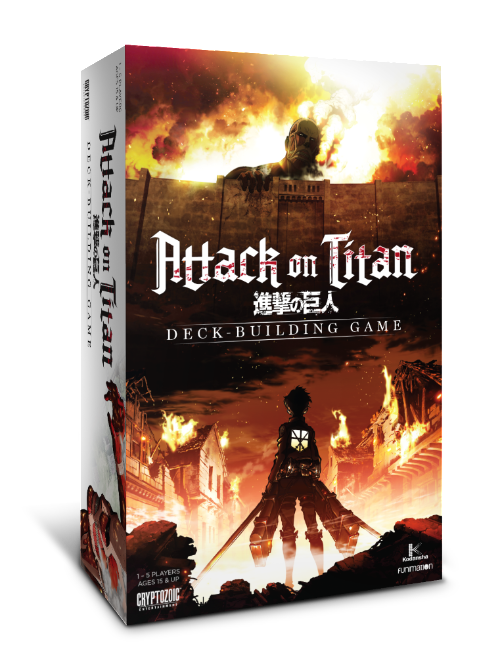 By now we should all be familiar with the Attack on Titan series, following the last survivors of Earth as they battle the massive, cannibalistic giants that assault them. Only through teamwork and careful strategy can we hope to succeed. Cryptozoic promises to bring all of these elements together with the deck-building Cerberus Engine, with its card game that releases today. Read below for more information.

“Matt Hyra and his team have added character game pieces, which provide a physical presence for players in the Attack on Titan Deck-Building Game. The movement choices players make have as large of an impact on winning as the cards they play. It’s an exciting evolution to the Cerberus Engine that brings deeper strategy and further immersion into deck-building games,” said Adam Sblendorio, Vice President of Creative, Cryptozoic Entertainment.
As with other Cerberus games, in the Attack on Titan Deck-Building Game there are always five areas of cards available for players to acquire at any one time. What is different is that each of these five areas represents a “District,” which is in turn protected by a Wall. Cards that the Heroes can buy are placed on the inside of the Walls, while Titans that appear are placed on the outside of the Walls.

Players become Heroes from the anime, including Eren, Mikasa, and Armin, each of whom has a unique special ability that helps the team. Along with a Hero Card, players have a Hero standee, since movement is a factor in the game, as utilized through cards with movement values. Players must move Heroes from District to District to buy needed cards, such as Ally, Equipment, Location, and Maneuver Cards. When they’re ready, Heroes can be moved over Walls to fight off Titans or protect Walls from being destroyed.

The Titans appear out of the main deck in the game, coming into play at semi-regular intervals. Archenemy Titans—like the fan-favorite Colossal Titan—usually require the whole team to combat since they have Hit Points. When players attempt a kill shot on an Archenemy Titan, it lashes out with a Titans on Attack Card, causing an unexpected event that might hamper a team’s ability to get the kill or make it a very costly victory. There are 10 different Archenemy Titans, making the four that appear during any play session very unpredictable. These Titans are broken up into levels, so the later they appear, the stronger they are. As a result, players need to focus on building a stronger deck—making their characters stronger—to have a chance to defeat them.

To win, players must defeat all four Archenemy Titans. They lose if the main deck runs out of cards, all five Walls fall down, or two Heroes die (three Heroes in a 2-3 player game).

The game will be available this week at retailers, and you can find more information directly on the Cryptozoic site.