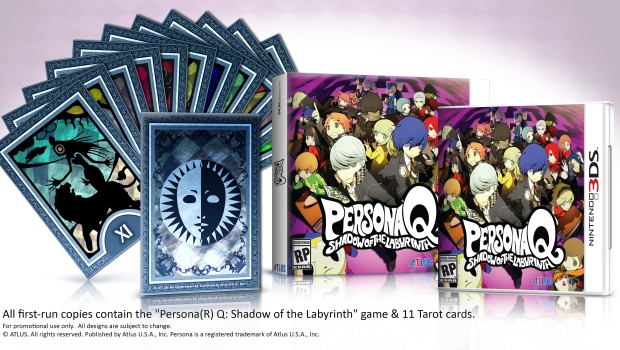 Atlus usually has some great bonuses for people who pre-order or purchase the collector’s edition.  Now Atlus has announced the bonuses for Persona Q, and they look pretty sweet:

Persona® Q: Shadow of the Labyrinth, the first Persona title for the Nintendo 3DS™ handheld system, now has plenty of revealing details on the pre-order bonus items. Persona Q, the first-person dungeon crawler that combines the cast of Persona 3 andPersona 4 in an all-new storyline will have two editions at launch – a normal retail bundle for $49.99 and the Persona Q: Shadow of the Labyrinth: The Wild Cards Premium Edition for $79.99. Pre-orders are now available for both Persona Q and the premium edition, which you can reach from the official game website: http://www.atlus.com/personaq

Before we get in to details about WHAT’S IN THE BOX, let’s make one thing very clear: these versions of Persona Q will only be available in limited quantities. The premium edition will only have a set number of units, and once they’re gone, they’re gone for good — we won’t ever manufacture the premium edition or the pre-order bonus goods ever again. Getting pre-orders in by mid-July is crucial to ensuring you receive the bonus goods described below. Without further ado, here are the details of the Persona Q box:

Persona Q is the first Persona game for Nintendo 3DS. The game takes the beloved characters from Persona 3 and Persona 4, puts them into an all new adventure. The game is in the style of Etrian Odyssey, where teams of five will navigate dungeons in a first-person view.  New characters, enemies, the presence of Etrian Odyssey‘s F.O.Es will give players all new challenges.

I have to say that the look of the extra really matches the game well.  If you are a fan, then be sure to check this out and pre-order while you can.  They will probably be gone quickly.