With a heavy emphasis on returning to their roots, Assassin’s Creed Unity was a showstopper for us. The four player cooperative play raised eyebrows, and we were truly surprised by the graphical fidelity. Today we have a video that showcases more of that gorgeous gameplay with a bit of a setpiece video. If you’ve missed our recent coverage, here’s a bit about Assassin’s Creed Unity:

Set amidst the chaos of 18th Century Paris, Arno, a young Master Assassin, will embark on an extraordinary journey to expose the true powers behind the French Revolution. His pursuit will throw him into the middle of a ruthless struggle for the fate of a nation and ultimately carve a new destiny for the people of France.

Assassin’s Creed Unity will be released on October 28 for Xbox One, the all-in-one games and entertainment system from Microsoft, PlayStation®4 computer entertainment system and Windows PC. Set in a once-magnificent Paris, Assassin’s Creed Unity plunges into the terror of the 1789 French Revolution and features the most dense and immersive Assassin’s Creed city ever created. Through the streets of Paris, the starving inhabitants are set to take up arms for freedom and equality. In this time of chaos and brutality, a young man named Arno, wounded by the loss of those he loved, sets out on a deadly path of redemption. Arno’s pursuit throws him into the middle of a ruthless struggle for the fate of a nation and transforms him into a true Master Assassin.

We also have a gorgeous in-game screenshot and concept art piece to share below. 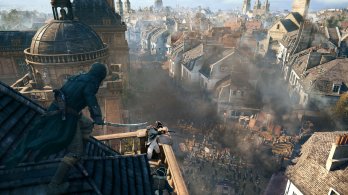 Assassin’s Creed Unity is the first title made exclusive for Xbox One, PlayStation 4, and PC, and is slated for release on October 28th.  You can check out our interview with Maxime Durand and my impressions from the stunning behind-closed-doors demo right here.