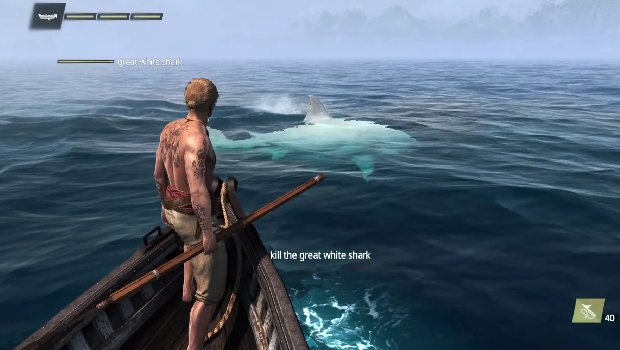 Eurogamer has picked up some details about the upcoming seafaring antics in Assassin’s Creed IV: Black Flag. At this point, anyone following Assassin’s Creed knows there’s going to be some open-world exploration, and a fair share of that is going to be out on the ocean. And this is quite large as far as oceans go – game director Ashraf Ismail claims that it takes around a half hour to transverse the water in its entirety, which makes one glad the game has fast-travel options. Of course, this only sounds so impressive. It’s an ocean, after all, and in case you haven’t been out in the middle of one before, let me assure you it can be pretty boring. That won’t be the case in Black Flag, as you’ll be able to easily locate challenges and side missions – like the pictured shark-hunting – with ease.

At this point it would be a bad idea to bet against the minds at Ubisoft – they’ve come a long way with the Assassin’s Creed series, and it’s been a damn fun ride. If they can make seafaring and ocean exploration into an excitable thing – remember, the focus here is on action, not just providing some nice nautical sights to gawk at – it will be quite and accomplishment. But considering they’re walking into this with pictures and footage of a man spearing Jaws to death, I’d say they’re on the right track.