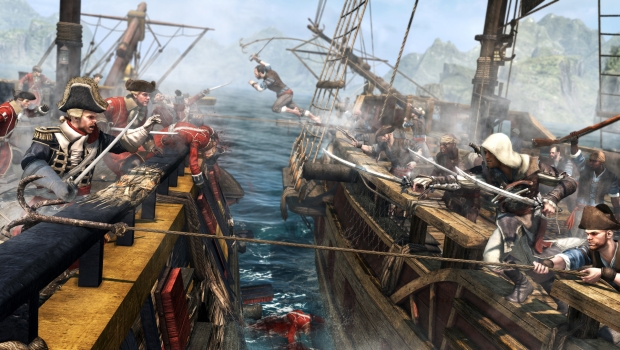 Setting sail on the last two platforms, we’ve got the announcement that Assassin’s Creed IV Black Flag has shipped for PC and for Xbox One.   There are three editions available for the digital PC version – a standard, gold, and Uplay Gold Edition.  The Gold edition comes with a Season Pass including some extra customization and the adventures as Aveline.  The Uplay Gold Edition also comes with a season pass but also includes an additional in-game pack called “Pride of the West Indies”, and is elusive to the PC and this edition.

Assassin’s Creed IV Black Flag tells the story of Edward Kenway, who falls from privateering for the Royal Navy into piracy as the war between the major empires comes to an end. Edward is a fierce pirate and a seasoned fighter who soon finds himself embroiled in the ancient war between Assassins and Templars. Set at the dawn of the 18th century, the game features some of the most infamous pirates in history, such as Blackbeard and Charles Vane, and takes players on a journey throughout the West Indies during a turbulent and violent period of time that becomes known as the Golden Age of Pirates.

Assassin’s Creed IV Black Flag Season Pass grants a 20 percent savings off the regular price of each individual downloadable pack included. The Season Pass will be available for Xbox One, Xbox 360 and Windows PC, PlayStation®4 system and PlayStation®3 system.

You can check out my video review on current-gen right here.  Look for our continued coverage of this fantastic title as we dig into the next-gen platforms!