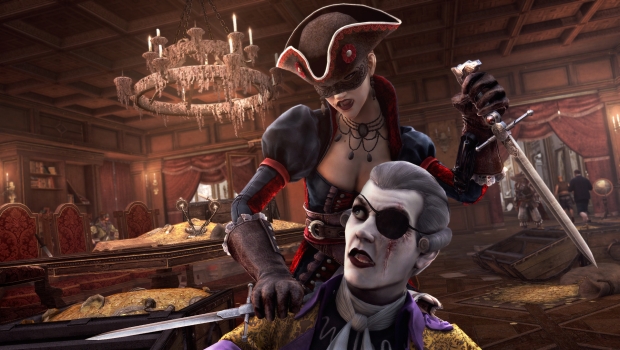 You might have spotted our recently-released multiplayer screenshots for Assassin’s Creed IV: Black Flag, but how about a look at the multiplayer in motion?  Today we take a look at the paranoia-inducing multiplayer and some of the new features it will spring on us later this year.   Two maps, one called Portobelo and another called Santa Lucia, shows us the modes that pop up as you progress through the sequences.  Defending treasure chests, synchronized kills with your teammates, suppressing an infection (by killing targets, of course), and some beautiful cutscenes round out some footage that make the wait till later this year that much longer.   You can check out the trailer below:

We did some extensive preview work on ACIV: Black Flag last month, detailing the second screen experience, free-roaming, and new stealth mechanics.  It also picked up our Action Adventure game of E3 2013, and a nomination for Best Graphics of E3 2013.  Between this one, Watch Dogs, South Park: The Stick of Truth, Splinter Cell: Blacklist, and several more titles, Ubisoft is about to have an incredible year.

Assassin’s Creed IV: Black Flag is set for release on Xbox 360, PlayStation 3, Wii U, and PC on October 29th, and Xbox One and PlayStation 4 in November.