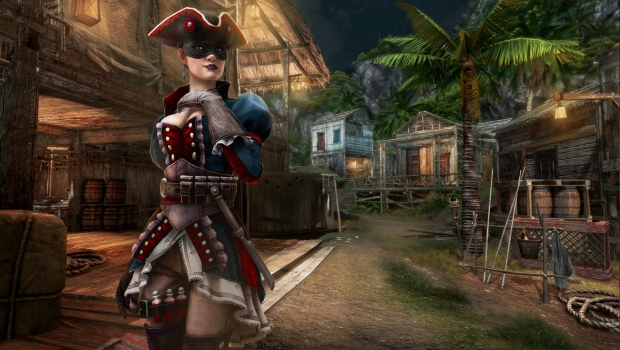 There is no doubt that the high-seas action in single player for Assassin’s Creed IV: Black Flag looks phenomenal, but you can’t ignore the multiplayer.  Paranoia-inducing, unique, and absolutely beautiful, the multiplayer game features an all new (and very interesting) cast of characters pulled directly from the Golden Age of Pirates.   We’ve got some fantastic screenshots, as well as some incredible concept art for two characters and two maps.   We also get our first look at the Gamelab – the system by which you’ll set up your own custom map parameters.  Want to turn off whispers?  Done.   Want to force specific ability sets?  It’s an easy setting change.   It’s hard to believe how much of a jump this game is making as we move to the next-gen systems, but I know one thing for sure – I can’t wait!   Enjoy the screenshots and art work.  Look for Assassin’s Creed IV: Black Flag on Xbox 360, PS3, Wii U, and PC on October 29th, with Xbox One and PlayStation 3 shipping in November.