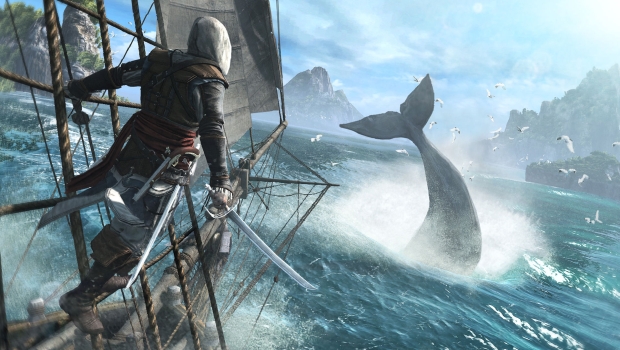 If you check my review for Assassin’s Creed III you’ll see that I wished greatly for a game wrapped around the sea battles in that title. Well, Black Flag is exactly that, and today we’ve got a video showing off the first gameplay moments for the game.  Here’s the little bit we know so far on the storyline:

Assassin’s Creed IV Black Flag tells the story of Edward Kenway, a young British man with a thirst for danger and adventure, who falls from privateering for the Royal Navy into piracy as the war between the major Empires comes to an end. Edward is a fierce pirate and seasoned fighter who soon finds himself embroiled in the ancient war between Assassins and Templars. Set at the dawn of the 18th Century, the game features some of the most infamous pirates in history, such as Blackbeard and Charles Vane, and takes players on a journey throughout the West Indies during a turbulent and violent period of time later to become known as the Golden Age of Pirates

The game has already gotten an announcement of a pre-order pack of goodies from GameStop including a new quest, a ship, some pistols, and some multiplayer goodies.

In Assassin’s Creed IV Black Flag’s The Black Island Pack, Captain Morgan’s favorite ship sank off the coast with a full load of legendary sailing equipment. Explore the Black Island and retrieve sought-after treasure to aid you on your adventures.

The game is slated to hit Xbox 360, PS3, PS4, Wii U, PC, and “other next generation consoles”.  Unless Sega is getting back into the hardware business or we get a NeoGeoNextGen, I think that safely means the next-gen Xbox as well.  Look for our continued coverage as we approach the October 29th, 2013 release date.