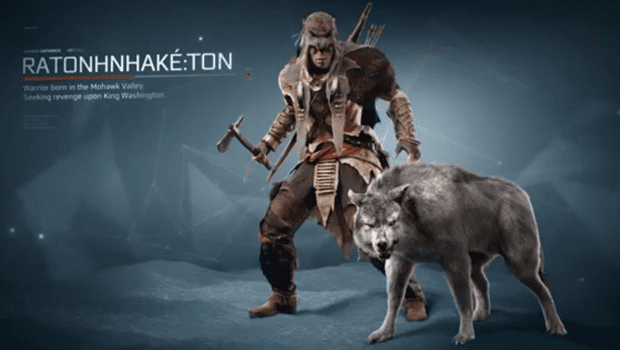 Remember how George Washington went mad with power and crowned himself king, prompting a native american assassin to use his totemic powers in a one-man war against his tyranny? If not, shame on you – you should have paid more attention in history class. But don’t fret – Ubisoft has announced the first of a series of DLC their critically acclaimed Assassin’s Creed III, where you can re-enact these events and learn a little thing about America’s founding in the process! Edutainment has never been this fun! Some more details and some video after the cut.

Before I go on, I feel this strange duty to mention that, of course, this is some wild, fictional take on American history. It’s obvious, I know, but if I don’t say that I get the strangest feeling I’ll get angry emails from someone who flunked their history test. Anyway, here’s some legitimate details about the game, straight from Ubisoft themselves:

In the shattered reality of The Tyranny of King Washington, the events that shaped a young Mohawk warrior into the heroic Connor of AC3 never happened thrusting a confused Ratonhnhaké:ton into a sometimes torturous, yet occasionally blissful, waking dream.

The revolution was just the beginning, Assassins!

In addition, the entire DLC series has been dated:

You know, at first I thought that : being in the name was a typo, but no, they have that right in the video so it’s entirely correct. Really, for those of you who love Assassin’s Creed – and judging by how popular the game is, there’s an awful lot of you out there – this one looks like it could be a lot of fun. Best of all, look at that absolutely ominous, kind of psychotic looking George Washington. Really, I don’t even have this game, and I feel like picking it up just in the hopes of eventually going mano y mano with that guy.