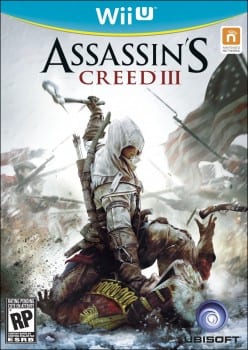 You’re not going to find any clues for the release date of the Wii U here, but you’ll be at least be comforted by the fact that when it launches, you can look forward to epic stabby deaths during the American Revolution on Nintendo’s new console. Also, PC gamers won’t have to wait out a whole season like they did with the previous games, as they can pick it up in November.

Today, Ubisoft announced that Assassin’s Creed® III for Windows PC will be available on November 20 in the United States.

Set against the backdrop of the American Revolution in the late 18th century, Assassin’s Creed III introduces a new hero, Ratohnhaké:ton, of Native American and English heritage. Adopting the name Connor, he becomes the new voice for justice in the ancient war between the Assassins and Templars. Players become an Assassin in the war for liberty against ruthless tyranny in the most stylized and fluid combat experiences in the franchise to date.

I don’t know about you, but this is my single most anticipated game this year. And it’s always nice when everyone gets a fair chance to pick it up without waiting six months after it first comes out.