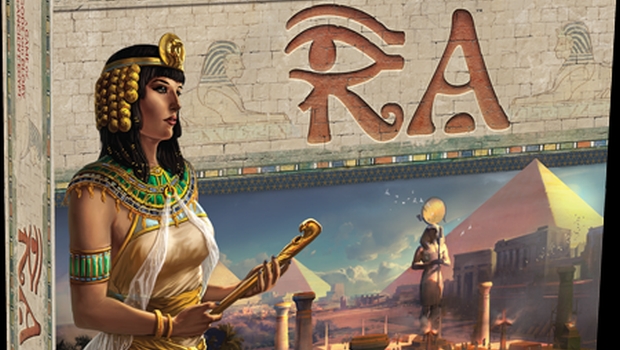 Reiner Knizia has developed a large number of games.  One of the most sought after games is Ra, but it has been out of print for a long time.  However, that will be changing soon, as Asmodee North America has announced that they will be reprinting it with a new studio in their group, WindRider Games.

Today, at the GAMA Trade Show, Asmodee announced a new edition of Reiner Knizia’s fast-paced auction game, Ra. This edition features all-new graphic design based on the art of Ancient Egypt, while maintaining the game’s elegant original mechanics and fierce, interactive gameplay. It also marks the debut of a new studio in the Asmodee Group, WindRider Games.

In Ra, players compete to build the best Ancient Egyptian civilization by acquiring tiles through action. From the start of the game, a selection of tiles representing cultural achievements, architectural wonders, the Nile itself, and various Ancient Egyptian deities is available to be bid on. Each turn, players can choose to add to the pool of tiles or to hold an auction by invoking Ra. Acquired tiles and bidding resources are kept visible, so that players can use that information to shape their decisions. The player with the most points at the end of the game wins.

“I am very pleased that Ra is WindRider’s first release,” the head of WindRider Games, Steven Kimball, has said. “It’s one of Dr. Knizia’s most beloved designs because of its high amount of player interaction and the difficult decisions that create tense, dramatic gaming moments. This new version makes it once again possible for players to invoke the power of Ra and experience the Egyptian sun god in all his glory.”

Ra is designed for two to five players and can be played in under an hour. It constitutes the third game in the Euro Classics line, which WindRider Games is taking over from Fantasy Flight Games. Ra is currently scheduled to be released in the second quarter of 2016.

With Asmodee behind the production, the pieces should be top notch.  Ra is another great game in Asmodee’s stable.  I wonder what other out of print games we might see from them in the future.