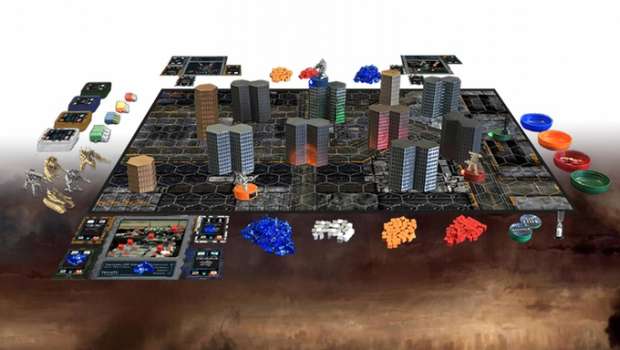 The Armored Core series started on the original PlayStation back in 1997 as a third-person shooter.  Since then it has shown up on several platforms like the PS2, PS3, and Xbox 360.  Now it will appear in a completely different form, a board game.  What makes this really unique is that it is a real-time strategy game.

No dice, no turns, no waiting, in Armored Core RTS, players pilot miniature mech models simultaneously through a 3D cityscape. They dodge around corners, boost to the rooftops, and activate weapons at the same time to capture the speed and action of the video games. How is this possible? The developers incorporated a variety of mechanics but the largest innovation is an LED pointer built into each miniatures’ base to provide instantaneous line of sight. Physical buildings provide cover from the lights.

This officially licensed board game version of Armored Core is for 2 to 4 players (expandable to 6), and has been specifically designed to be fast to setup, fast to teach and fast to play. Between the 20 minute missions, players spend the rewards they earn for accomplishing objectives to upgrade their mechs and equipment. Like the video games players are able to customize their mech according to their play­style and team role. Over the course of the campaign teams will strive to accomplish objectives for their faction in order to become the ultimate ‘Ravens’.

You can find it now on Kickstarter, and it has almost reach twice it’s goal, and there’s a cooperative expansion that you can get with it.  This sounds really innovative, and I can’t wait to get a look at how this is played.