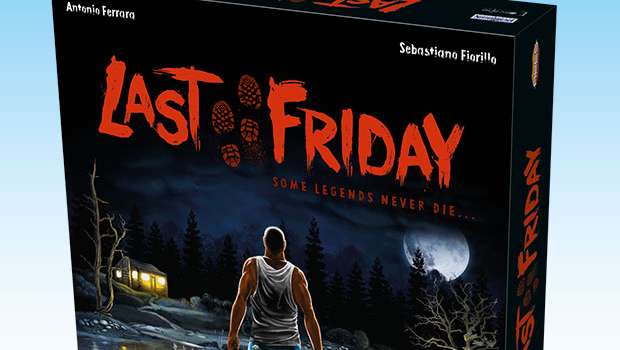 Ares Games will be at Essen Spiel 2016 (Hall 3, Booth E100,October 13-16, Messe Essen) presenting two new releases – the survival horror game Last Friday and a new wave of Sails of Glory Ship Packs. More games just arrived on the market – the push-your-luck card game Behind the Throne, the second expansion for War of the Ring Second Edition board game, Warriors of Middle-earth, and the latest series ofWW1 Wings of Glory Airplane Packs – will also be introduced to the public. Exclusive promo cards will be offered with each copy of Last Friday and Warriors of Middle-earth.

At the Ares’ booth, players will also have the chance to try other recent releases: the Age of Conan Strategy Board Game and its expansion Adventures in Hyboria, the deduction game Odyssey – Wrath of Poseidon, and the fun and simple Quickpick – The Island of Monster Masks.

In the sales area, visitors will find several promotions and special offers, including the last remaining copies (now that the fulfilment and customer care service to Kickstarter backers were completed) of the Kickstarter edition of Age of Conan – Adventures in Hyboria and the WW1 Wings of Glory Giants of the Sky bombers.

Ares Games will also co-sponsor the Behind the Throne tournament, on Friday Oct.,14th, in hall “Brüssel”, from 11 am to 1 pm, together with the German publisher 2Geeks and the Ukrainian publisher and design studio, iGames. The tournament will have a limited number of participants – 56 players, with prizes to the 10 first winners. The 4th-10thwill get a “Behind the Throne” edition of her or his choice (German edition or Multi-language edition – English/Italian/Spanish), and the Top 3 winners will also get other games offered by the sponsors – Mysterium,Pirates of the 7 Seas, Best Treehouse Ever, Jolly Roger and Odyssey. For more information and to register, click here or at booth B-130, hall 4.

On Friday and Saturday, at 3pm, Ares’ booth will hold preview demo sessions of the epic-fantasy cooperative board game Sword & Sorcery with the game designers, Simone Romano and Nunzio Surace.

Last Friday is a scary board game set in a summer camp on which hangs a curse. This is a story of a maniac who died and rose again. In the role of young campers, players are challenged to survive a long weekend of terror or may take the role of the undying psychopath hiding in the shadows of the forest. The game is divided into 4 chapters

full of horror and suspense (Arrival at the Camp, The Chase, The Massacre, and The Final Chapter) – each chapter plays out very differently, as the hunter becomes the prey, and then comes back from the dead looking for revenge. Designed by Antonio Ferrara and Sebastiano Fiorillo (authors of the thrilling card game “Stay Away!”),Last Friday is a hidden movement, hunt, and deduction horror game for 2 to 6 players. A promo card, “Bubi,” will be available with purchases at Essen Spiel 2016. Last Friday is expected to hit the stores in November.

A new series of Sails of Glory Ship Packs is coming, adding to the tactical ship-to-ship miniature game some of the more iconic ships-of-the-line of the Spanish fleet fighting at Trafalgar, such as the Santa Ana, in addition to new British and French ships. The series features four different classes of ships, each of them in three variants: the French 64-Guns Artésien Class Ships-of-the-Line, the British 50-Guns Portland Class Fourth Rate, and the Spanish 112-Guns Meregildos Class First Rate, and 74-Guns Nepomuceno/Bahama Ships-of-the-Line. The ship packs include ship base, ship card and ship log printed on two sides, featuring the stats of two different ships. The 12 new ships will hit the stores in November.

Warriors of Middle-earth is the second expansion for War of the Ring Second Edition board game. It will bring Ents, Dead Men of Dunharrow, Great Eagles of the Misty Mountains, Corsairs of Umbar, Wild Hilmen from Dunland, and Giant Spiders, previously featured only as special Event Cards. They will become essential part of the game, with unique figures and specific abilities to be combined with new mechanics to open up new strategies when playing the War of the Ring board game. Warriors of Middle-earth is fully illustrated by John Howe, one of the world’s foremost Tolkien illustrators, and the main artist of the War of the Ring line. At Spiel 2016, any copy purchased will include a set with two special promo cards (“Fly, You Fools” and “I was sent to bear tidings, not Burdens”) – shrink-wrapped together with the game in the first printing copies of the expansion.

Behind the Throne is a simple and fast card game is suited for 2 to 4 players, designed by iGames – the team behind the popular “Mysterium” board game. Secret organizations are fighting for the right to rule over the Old Kingdom. Those who are struggling for power in the shadow of the royal throne are used to intrigues, blackmails, and threats. The more servants, nobles and dignitaries they control, the closer to the goal they are. Players collect sets of cards gaining special abilities and victory points. Various abilities make it easier to collect the cards, with victory points determining the winner.

That’s a dizzying amount of games for them to release or show off for the first time at Essen Spiel.  Be sure to check them out, as they should be available soon all over.