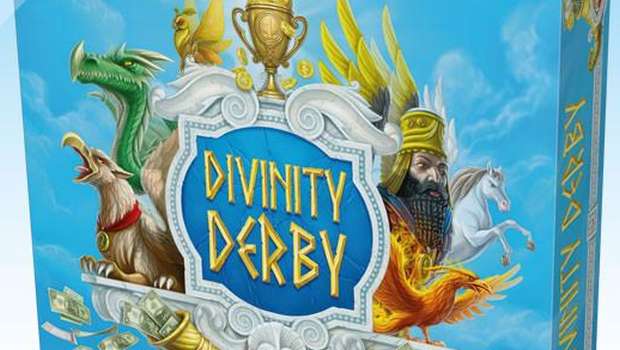 Racing isn’t an uncommon to theme to board games.  Some implement different card or dice rolling mechanics to move your own racers, while others have a physical mechanic for reaching the finish line.  Others make you bet for who will win the race.  The upcoming Divinity Derby from Ares Games looks like it has a unique theme with an interesting mechanic.

Ares Games prepares to launch in March a new Kickstarter project to fund the release of Divinity Derby, a fast-playing racing and betting game with a clever “shared hand” card mechanic.

A party on Mount Olympus quickly turn into a crazy race of mythic flying creatures, and the gods bid on (and influence) the outcome of the race, with the Olympic “All-father”, Zeus, as the ultimate judge.

Players assume the role of gods, betting on the race between legendary creatures. Each player plays with two hands of cards, sharing a cardholder with each neighbor. This original drafting mechanic creates a lot of interaction, as players conspire against (or with) the others. Dirty tricks, godly powers, the twists of Fate, and the capricious judgment of Zeus will determine the final winner.

Divinity Derby will present a great production value, including a colorful gameboard, six gorgeous miniatures, over 100 cards, card holders and tokens. The Kickstarter project will offer the Standard Edition of the game, similar to the retail version (but sent to backers first), or a Deluxe Edition with hand-painted miniatures (only available on Kickstarter).

Divinity Derby is a game for 3 to 6 players, designed by Carlo A. Rossi. The cards are illustrated by Ukrainian artist Denis Martynets and the miniatures are modeled by master sculptor Bob Naismith.

The Kickstarter campaign is planned to launch in early March – the launch date and details about the campaign will be announced in the coming weeks.

In the meantime, sneak previews can be seen on the Divinity Derby’s page on Facebook – https://www.facebook.com/divinityderby/.

This looks like an interesting mix of betting with drafting, and the production quality looks top notch.  Look for it on Kickstarter sometime next month.