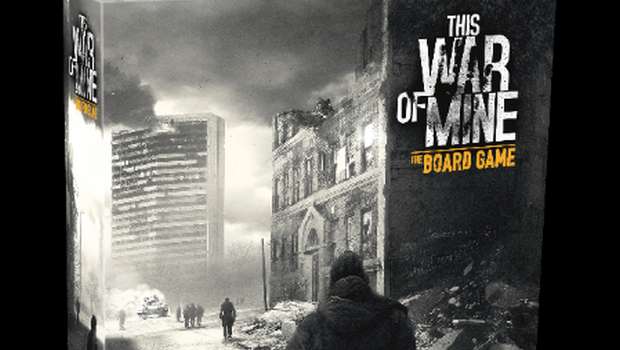 Ares Games has gone from a small publishing house starting with War of the Ring and expanding to several large games.  They recently announced their lineup for Gen Con, and the number of games is staggering.

Ares Games will be at Gen Con 50 (Booth #237,August 17-20, Indianapolis) and this year, in addition to its own new releases (including Galaxy Defenders – Final Countdown, a new expansion for the cooperative tactical board game, and a new series of Sails of Glory Ship Packs), it will also present five games published by Galakta, exclusively distributed by Ares in the USA. Among them, the acclaimed This War of Mine: the Board Game, tabletop adaptation of the gripping survival video game from 11 bit studios, which debuts at the show. Andromeda, Age of Thieves, Ragers: Champions of the Arena andZombie Terror, will be also in sale at Ares’ booth.

In addition to the new releases, three games to be released after the show will be previewed at Ares booth: the “prequel” to War of the Ring, Hunt for the Ring; the race and betting game Divinity Derby; and Return to Camp Apache, the first expansion for the scary board game Last Friday.

At the booth, players will also have a chance to try Ares’ recent releases, as Sword & Sorcery, theWW2 Wings of Glory Battle of Britain Starter Set, the family game Quickpick – Mutant Dinosaur Park, and the new edition of the horror card game Stay Away.

Exclusive promo items will be offered together with purchases at the booth, incluiding the promo mini-expansion “TV Set” with any purchase of This War of Mine: the Board Game, the promo pack “Chaos in Hadria” with Age of Thieves, the promo cards “Necronomicon” and “H.P. Lovecraft” with Stay Away, and “Bubi” with Last Friday.

This War of Mine – the Board Game – Cooperative game about surviving in a war-ravaged city, based on the gripping survival video game by 11bit studios. Players are part of a group of civilians trapped in a besieged and conflict-ridden city, enduring many hardships that test the essence of humanity. To survive, they need to make tough ethical choices, which have consequences that last the rest of the game. This War of Mine was adapted to tabletop by the game designers Michał Oracz and Jakub Wiśniewski, and funded with a campaign on Kickstarter that raised £621,811 in pledges, supported by 9,627 backers. This War of Mine: The Board Game is a game for 1 to 6 players, 18y and up. Published by Galakta Games, its English edition will be distributed by Ares Games worldwide, excluding Europe, from August 2017. The “TV Set” Promo Mini-Expansion will be available with purchases at Gen Con.

Age of Thieves – Master thieves are challenged to commit the most daring burglary of their careers: enter the vault inside the palace and steal the Emperor’s Jewel, the symbol of power of the ruling house. Age of Thieves is a clockpunk board game of strategy and adventure set in a port metropolis of Hadria. Each player becomes a master thief about to commit the most daring burglary of his career. During the game, players use unique abilities and action cards, which feature acrobatic maneuvers, alchemical potions or complicated devices inspired by the visionary ideas of Renaissance inventors. It’s a game for 2 to 4 players, aged 14+. The promo pack “Chaos in Hadria” with Age of Thieves will be available with purchases at Gen Con.

Andromeda – A strategic board game for 2-4 players. In the far future, the humanity is long extinct, and its place has been taken by many new races from across and beyond the galaxy. When a mysterious, abandoned spaceship, containing ancient technology is detected, a group of representatives of different races will explore it, and the chase for knowledge begins. Each player becomes a leader of one race. Players collectively explore the spaceship thus trying to secure long-forgotten technology that might help their races in dominating the universe. Additionally, each player tries to fulfill missions given by his superiors as they bring him ever closer to victory. Andromeda is a game for 2 to 4 players, aged 14+.

Ragers: Champion of the Arena is a fun, quick and aggressive card game card game of wits and bluff. Each player becomes a head of a team of Ragers – powerful fighters who settle disputes between tribes during the Great Thing that lasts for three days. Each day of the Great Thing is devoted to a different deity, and each day bloodthirsty spectators expect daring feats of strength and cunning, so the conditions of combat change constantly. During the round of Ragers: Champions of the Arena, players play cards depicting brave warriors and representing different types of attacks and special actions. It is up to the players to choose the best strategy that will appease the crowd and enable them to outsmart their rival.Ragers is a game for 2 players, aged 14+.

Zombie Terror is game of survival in the zombie-infested world. Only a few have managed to stay alive after the zombie apocalypse. A small group of survivors hide inside a shopping mall, but the apparently safe place soon turned out to be a dead end – literally! In the face of danger, they have only one choice – to escape! However, the only way leads through a parking lot full of brain-thirsty zombies. Zombie Terror is an asymmetrical game for two players. One player becomes the leader of the surviving humans who must be smart and ready for any sacrifice if they hope to survive in the world full of deadly surprises. The other controls the ravenous zombie horde with only one goal – to feast on the human corpses. Zombie Terror is a game for 2 players, aged 14+.

Final Countdown – The new expansion for Galaxy Defenders  allows to boost the game with three powerful new agents to expand the GD agency’s army – Scandium, Xeno-Warrior and Vanadium. It also includes new Doors and Windows Stand–up tokens, to take the battlefield to the third dimension, and an additional set of custom GD dice. Final Countdown expansion may be integrated into any Galaxy Defenders mission, playing with the GD Core Set or the campaign expansions Operation Strikeback and Extinction Protocol.

The new series will also introduce three East Indiamen Ex-Merchant Ships – large merchant ships converted to warships: the French flag Duc de Duras 1765 and Bertin 1761, and the famous Bonhomme Richard 1779, loaned by the French Crown to the newborn American Continental Navy. Each Sails of Glory Ship Pack features a ready–to–play model, painted and assembled, all needed to play the ship (ship base, ship card, and ship log – printed on two sides, with the game data of a second ship on the back) and a special deck of maneuver cards.

The Hunt for the Ring – A new game coming to the War of the Ring line, Hunt for the Ring is a hidden movement, deduction and adventure game, for 2 to 5 players, that recreates the initial chapters of “The Lord of the Rings”. In the game, one player must bring Frodo Baggins – the Ringbearer – and his hobbit friends from their home in the Shire to the sanctuary of Rivendell, where the fate of the One Ring will be decided. Using secrecy and the help of powerful allies, the Ringbearer must escape the chase of the Nazgûl, which is controlled by up to four other players.

Hunt for the Ring is designed by Francesco Nepitello and Marco Maggi, co-designers of the award-winning “War of the Ring” board game, and Gabriele Mari, designer of “Letters of Whitechapel”, “Mister X” and “Garibaldi”. The game features cover and character art by John Howe, seven highly–detail miniatures sculpted by Bob Naismith, and a beautiful game board by Francesco Mattioli. Due to release in October 2017.

Divinity Derby – A party on Mount Olympus quickly turn into a crazy race of mythic flying creatures, where the gods bid on (and influence) the outcome of the race, with the Olympic “All-father”, Zeus, as the ultimate judge. In Divinity Derby, a fast-playing card-driven game, each player assumes the role of a god, betting on a race among mythological flying creatures, and plays with two hands of cards, sharing a cardholder with each neighbor, conspiring against – or with – the other players.

The game, for 3 to 6 players, age 10 and up, is designed by Carlo A. Rossi and features a colorful gameboard, six miniatures modeled by master sculptor Bob Naismith, over 100 cards (illustrated by Ukrainian artist Denis Martynets), card holders and tokens. Due to release in September 2017.

Last Friday: Return to Camp Apache – Ten years after the tragic Camp Apache massacre narrated in Last Friday, in the nearby village of Spring Forest, an ancient Evil is waking up again. Something that the people of the village tried to forget for years: a Demon who can enter people’s dreams and twist them into horrible nightmares…After the unexpected deaths of their friends, a group of young men and women realize that they must try to stop the Demon. They need the help of someone who truly understand what they are facing – the Marshall, who long ago was the “Predestined” who defeated Camp Apache’s maniac. But the Marshall disappeared, and they must get to Camp Apache to find him. Return to Camp Apache is the first expansion for Last Friday, and will allow to play the game with up to 7 players. Due to release in September 2017.

They have several new games coming as well as previews for upcoming games.  If you haven’t checked out Ares Games and you’re at Gen Con, be sure to find them and take a look at their lineup.