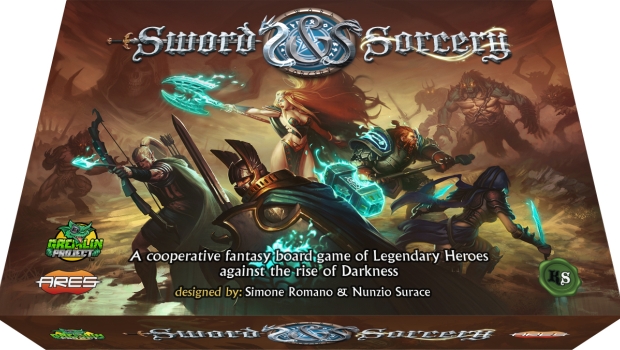 The thought of a dungeon crawl is not new to the gaming world.  Dungeons and Dragons is the game probably most thought of when this genre comes up.  Recently several cooperative board games have come around to give that feel without someone playing as the bad guys.  Soon Ares will bring another of these to Kickstarter, Sword and Sorcery.

The countdown for the launch of Sword and Sorcery on Kickstarter begins: the new  game developed by Gremlin Project and published by Ares Games will be launched on Kickstarter on October, 15th, 2015, ending on November, 12th.

Sword and Sorcery is an epic-fantasy cooperative, tactical board game, designed by the same team who created Galaxy Defenders. One to five players control heroes with unique powers, to fight against the forces of evil.

The Sword & Sorcery campaign on Kickstarter – aimed to fund the pre-production and publication of the game and to launch the Sword & Sorcery game line – will present two pledge levels, one for individuals, one for retailers, and “Day 1 Early Bird” will offer 10% discount on the normal pledge amount during the first 24 hours after the project launches.

The game is the next step in team-based fantasy RPG: both heroes and enemies have a huge range of powers and abilities, and each encounter will always offer a new, unpredictable experience. The heroes are legendary characters, brought back to life by powerful sorcery. Weakened by the resurrection, they grow stronger during the story-driven quests. Its game system represents the perfect evolution of the mechanics first used in Galaxy Defenders.

An innovative A.I. system allow the control and management of enemies by the players, giving them intelligent behavior and creating interesting battles every time, with no Game Master required. In Sword and Sorcery there is no player elimination – when a hero dies, he becomes a ghost soul, an ethereal form able to use its unique ghost shout against enemies, and he can later come back to life by spending Soul points at the Gods altar.

The game is due to release in second half of 2016. More information about Sword and Sorcery can be find on the game’s website – http://www.sword-and-sorcery.com/ and on its Facebook page – https://www.facebook.com/SwordAndSorceryBoardGame, with daily updates presenting the characters and game play previews.

This is definitely a game to watch, since it comes from the same developers as Galaxy Defenders.  They have a lot of great ideas, and having no player elimination should add some extra depth to the game.  Be sure to check out the Kickstarter on the first day to get that extra discount.